Sunday 29th April 2018 provided another opportunity to revel in the wonder of God’s majesty and bask in the awesomeness of His presence at The Synagogue, Church Of All Nations! Visitors from across the globe converged at the Arena of Liberty to hear touching testimonies, sing heartfelt praises and witness moving miracles! They were not disappointed as God’s power was brought mightily to the scene!

Prophet T.B. Joshua shared a valuable message titled, ‘Faith About Eternity’ in which he addressed several vital issues for Christians.  “To learn how to believe that God hears us when we pray is a much greater blessing than healing, deliverance and breakthrough,” Prophet T.B. Joshua began. He then went further to encourage believers to handle their tests and trials in faith, with the knowledge that they are necessary tools to help foster spiritual growth. “Our troubles, challenges and situations are instruments to maintain our union, oneness, relationship with God,” he vividly explained. “We must understand that our values must be tested against facts and experiences. If we are not willing to pay a price for our values, we should ask ourselves if we truly believe in them.” 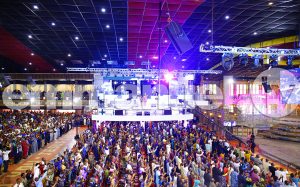 Prophet T.B. Joshua then used the case of Peter in the Bible to illustrate his point. “The case of Peter at the river serves as a good example. Assume Peter caught fish earlier, he would have missed the redemption. His wasted hours served to keep him for a new level in life (Luke 5:1-11). What are the things you are praying for, whose answers seem to be delayed? Maybe God wants to preserve you for redemption, prepare you for the challenges ahead, strengthen your desire for Him or keep you for a new level in life.”

After delivering the message, Prophet T.B. Joshua moved in the midst of congregants, praying and prophesying as directed by the Spirit of God. The service then culminated in a powerful time of Mass Prayer, with specific prayers for the nation of Nigeria being offered.

Earlier in the service, several individuals testified to the goodness of God in their lives:

“IT WAS AS IF HEAVEN OPENED!” 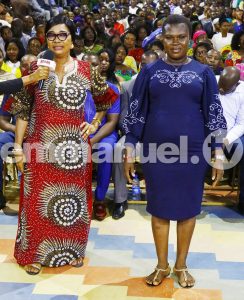 “God is a wonderful architect!” Mrs Florence Ekeocha exclaimed as she danced to the front of 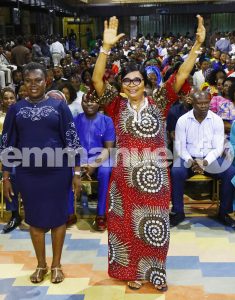 the church to share her testimony. A stark contrast from last Sunday, when cries of “Man of God, help me!” were heard from a car parked outside The SCOAN where Mrs Ekeocha was helplessly seated. A prolapsed intervertebral disc, grade 1 lumbar spondylolisthesis coupled with numbness and weakness of the right foot left her unable to walk.

The assistant comptroller of customs from Imo State, Nigeria suffered with these horrible problems for over one year, greatly affecting her career. She took many pain killers, visited physical therapists and underwent surgeries to no avail. Eventually, her daughter in Christ told her about The SCOAN and she decided to come. When the man of God, Prophet T.B. Joshua prayed for her, she said that it was as if Heaven opened and she felt the healing power of God rush through her entire body, uprooting her sickness. Suddenly, the pain left her and she was able to walk!

Testifying in front of the congregation, she marched back and forth and exercised, declaring that she is now fit to go back to her work! Mrs Florence advised people to come to the presence of God for their solution.

WHY ALL THESE GADGETS?

“Why all these gadgets? There is a boil in your private. It swells up and blocks your private. Suddenly, it will disappear. Be careful. It can 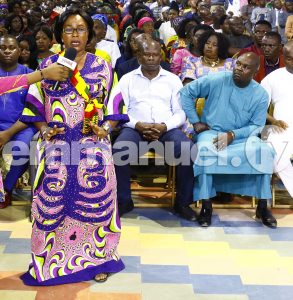 form cancer. It is one of the things destroying your marriage.” With these words, Prophet T.B. Joshua began to pray for Mrs Elizabeth Adoko from Ghana, who came to The SCOAN suffering from osteoarthritis, wearing a lumbar corset, bilateral knee braces and a bandage on her hand to relieve numbness. As she received the prayer, she suddenly felt heat at her hip and waist, moving through her bones. It was as if she had been put in an oven. Suddenly, she stood up and began walking for the glory of God!

The teacher came into the congregation, walking perfectly and freely for the glory of 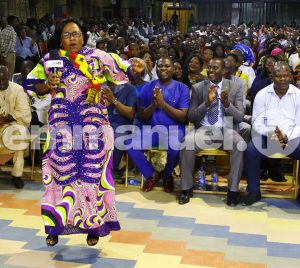 God! She testified that her profession had been greatly affected as she couldn’t walk properly or sit for long periods. After going to different physiotherapists and hospitals, all she was given was a lumbar corset, knee braces and loads of medication. She asked the doctors if there would ever be any cure for her problem. The first and second doctors said no. The third doctor said she needed to go for a hip replacement which was very expensive and only had a 50/50 chance of success. During that time, she had been watching Emmanuel TV and developed faith in God, the Great Physician.

On coming to The SCOAN, she was surprised to receive the prophetic message before prayer. Confirming the prophecy, she stated that during her youth, a boil would often appear in her private part, swelling up and causing blockage. After she got married, the boil would affect her when she met with her husband. It affected her health and her marriage but after the touch from God’s anointed servant, Mrs Adoko has been completely healed from all ailments, to the glory of God!

A YOUNG LADY WITH AN ELDERS KNEE 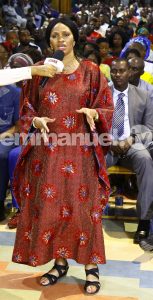 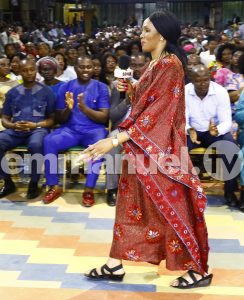 ligament injury which caused her imbalance, a nurse from the USA decided to pursue supernatural means to end her five-year battle with sickness. After examination, knee specialists compared the condition of her knees to that of an 80-year-old! She concurred, going by her experience as a professional nurse, having seen similar sicknesses afflicting the elderly. Several foot surgeries were recommended for her but she decided she would rather sit at the feet of Jesus Christ, the Master Healer!

With a steely resolve, she flew from USA to The SCOAN in Lagos, Nigeria – despite swirling rumours that it was impossible to actually receive prayer one-on-one from Prophet T.B. Joshua. During the service last week, Mrs Imafidon was pleasantly surprised when she saw Prophet T.B. Joshua approach her. He prayed for her in Jesus’ name and within moments, she was walking freely, balanced, pain free and without any support. To God be the glory! 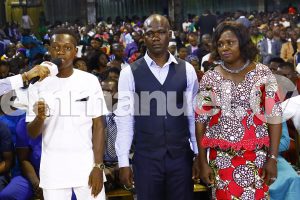 Overjoyed, the young ThankGod Oyibe and family came to The Synagogue Church Of All Nations to testify to the glory of God in his life for delivering him from the spirit of bedwetting for 19 years. Recounting his experience of how bedwetting had affected his life, the young man explained how he would have bad dreams in which he would eat and see a lady coming to sleep with him and when he woke up, he would find that he had wet the bed. In boarding school, he frequently wet his bed and unable to hide his plight, was ridiculed by classmates causing him great shame. It got to the extent that his roommates wanted him to be removed from their room because of the odious smell.

Eventually, ThankGod discovered Emmanuel TV and seeing a solution ground, he visited The SCOAN where he received prayer from Prophet T.B. Joshua and a Faith Bracelet. When he went back to school, he used the Faith Bracelet meditating on the Word of God, saying, “Lord, take more of me and give me more of You”. Since his visit to The SCOAN, he never once wet the bed again! ThankGod said his spiritual, personal and academic life has been totally transformed; he is now confident with his peers, has begun doing well in his studies and no longer has strange dreams. ThankGod’s family also appreciated the wonders of God in the life of their son and testified to the changes they have seen in his social and academic life.

Indeed, if the Lord sets you free, you are free indeed and your blessings would be a testament to those around you of the signs and wonders of God’s awesome power in your life.