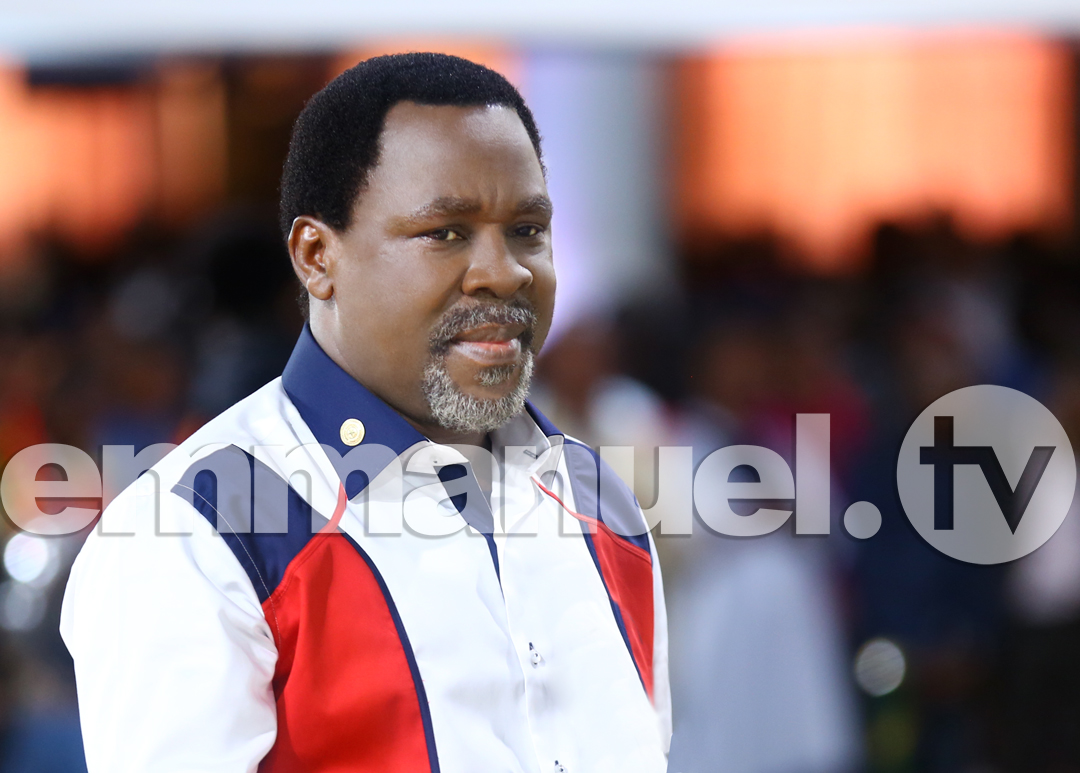 “Come, Lord Jesus and abide in our hearts. Teach us, Lord the Psalm of faith and restore our calm despite our fear and doubt, in Jesus’ name”. With this prayer, Prophet T.B. Joshua took the altar on Sunday April 22, 2018, advising viewers around the world that, “All you need now is the gift of eyes that see, of ears that hear what Jesus is telling us…Don’t allow emotions to blind your reason. How can Jesus be honoured when you are looking at Him by sight, hearing Him with your ears? Only faith pleases Him; only faith hears Him”. To those that joined live in the congregation and those that joined live around the world on Emmanuel TV, the prophet encouraged them that God had prepared them in advance before He put them on the journey to come to the church at that moment. The table has been set before them. Therefore, our prayer should be, “Thank You, Lord for a more glorious answer to my prayer”.

Earlier in the service, another word of encouragement was given. Using a number of practical illustrations in a message titled: WRESTLING WITH WRONGS, Evangelist Chris drove home the point of our need to repent and receive forgiveness, saying, “It is not that children of God do not wrong but when they do, the guilt of that action would not allow them to have peace of mind until they ask for and obtain forgiveness”.

A number of thought provoking questions were asked such as, “How do you know a true child of God?” and, “How do you react each time you take a wrong step?” prompting listeners to examine themselves as believers and readjust if necessary. He said, “The thought in your heart is the battle you will fight until Jesus comes. Even if you overcome all, you will still fight the battle until the last day”. But remember the motto of a child of God, “Nothing can separate you from the love of God!” He continued by saying, “Your wrong should not separate you from the love of God. It means you possess the divine ability to stand in God’s holy presence without any sense of unworthiness. Not that you are perfect but perfection is with you. Not that you are holy but holiness is by your side. Not that you are righteous but righteousness is backing you up”. A motivating message indeed for children of God to be doers of the Word, not simply hearers and bench-warmers. 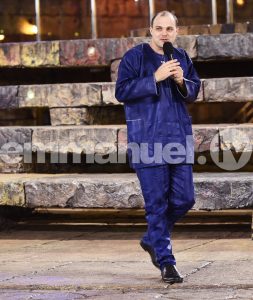 After these heartening words, God led Prophet T.B. Joshua through the congregation, ministering prayer, healing, deliverance and prophecy in the power of the Holy Spirit. The testimonies followed….

“GOD WILL FULFILL YOUR DREAM” 9-YEAR-OLD ADVISES
Saturday mornings in the home of a young boy usually start with the sound of little feet running through the house, the slamming of a door and shouts as they race to a friend’s house. But in Ramsey’s house, Saturday mornings were quiet, absent of friends, running or playing. For little Ramsey was in constant pain. Since he was four years old, he had suffered from avascular necrosis of the hip and could not walk or move on his own. Aided by a pair of arm crutches, he could only stumble around short distances before curling up in pain. Too uncomfortable to develop friendships, he remained at home with his mother, an ever-growing solitary young boy. Finally booked for an operation in Kenya, Mrs Odhiambo decided to turn to God and bring her son to The SCOAN for God’s divine intervention. 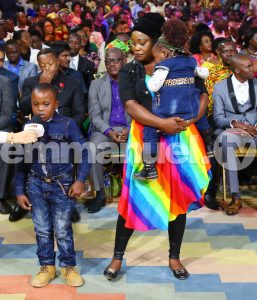 As Prophet T.B. Joshua ministered to the congregation, the little boy cried out, “Man of God help me!” And as he received prayer from the man of God, he explained, “I felt something moving In my body and the pain went instantly!” Immediately, Ramsey began to walk, crutch free!

With the wisdom of the elderly, young Ramsey advised the world, “Believe in God; He will fulfill your dreams”. 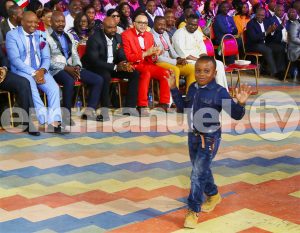 SNAKES, WOMEN AND RAGE
Seeking consolation over the death of his father, Mr Neil Pompi Maake from South Africa consulted a spiritualist and was shown the underworld – an old woman handing her underwater kingdom to him and a man handing him a crown with a golden snake. He was told that he could now ask for and receive anything he wanted. Immediately upon waking up, he found himself possessed with the spirits of lust, rage and alcoholism and his life altered. He became renowned for a lavish lifestyle – visiting nightclubs, fighting with gunmen and throwing money around on alcohol, women and friends. He began buying and changing cars as often as he changed women. In the course of 8 years, he had 8 different girlfriends and each girlfriend had at least one child for him, leaving him with 11 children. The evil spirits told him that the women must never abort any of his children or they would also die and at the age of 13, the children would die so they could be used by the evil spirits. 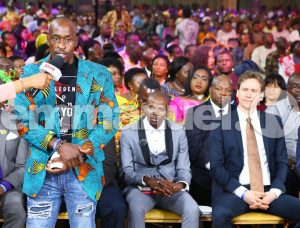 In the 9th year of this atrocious lifestyle, his 9th girlfriend became frightened after one unusual encounter.  Full of rage, his eyes began to change and his girlfriend saw a snake manifesting in him. In efforts to save her life, she poured boiling water on him, ultimately calming the situation. Shocked, she told Neil that he needed to watch Emmanuel TV for deliverance. They fought violently but Neil eventually sat and watched the channel. He touched the screen and prayed with Prophet T.B. Joshua and instantly, the spirit of snake in him began to manifest and he began to vomit blood. As the prayer ended, he felt a change in himself and realised that he needed to visit The SCOAN for prayer. The miracle had begun in his life.

Entering the arena of liberty last week, he was stunned when Prophet T.B. Joshua walked up to him and prophesied directly to his situation, “You have married 8 women and they have children for you…You are now on the 9th woman”. Delivered in the power of the Holy Spirit, Neil and his children were declared free from the curse, in Jesus’ name.

Testifying that the lust, anger, drinking, smoking and nightmares are a thing of the past, he advised all to seek God for deliverance and find consolation in Christ alone.

DON’T TELL MY WIFE I’M A DRUNKARD
“For better or worse,” Mrs Tindana promised as she took her wedding vows, not realising that worse would soon come as shortly after their wedding, she walked in on her husband in a drunken stupor. “What are you doing? Is that how you are?” she cried. “I was so embarrassed,” she recollected. “I became ashamed. He would get drunk and would not be able to walk home. I regretted getting married to him”.

Mr Tindana promised it was a one-off mistake but in actuality, it was a 20-year habit. Drunkenness had been his trademark from a tender age, having inherited the spirit from his father, an idol-worshipper, who would often send him to buy alcohol. He drank heavily, from morning into the night, often crashing his motorbike and falling into gutters in the process. “I tried in my own power to stop it but couldn’t,” confessed Mr Tindana. 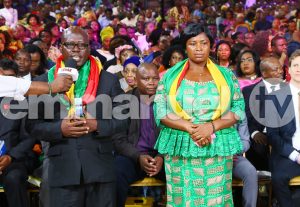 The change came the day his wife returned home to tell him of a television channel she had watched at a friend’s house. Turning on the TV, Mr Tindana came face to face with the power of God. He watched programme after programme on Emmanuel TV, captivated by the Word of God spoken through Prophet T.B. Joshua. “My faith grew, even more than hers,” he said. He later came to The SCOAN and received the Morning Water. The moment he ministered the Morning Water in prayer in Jesus’ name, the spirit of drinking left him! For the first time in 20 years, he found himself completely sober. Mr Tindana exclaimed that it has been four years since he first prayed with the Morning Water and four years since he tasted alcohol. Truly, when the Son of God sets you free, you are free indeed!

TEN BABIES DIED IN MY WOMB
The joy of pregnancy enveloped Mrs Edith Ariyo as she spent months dreaming of holding her first newborn baby in her arms on delivery day. But the dream turned to a nightmare the night she saw a strange woman demanding for her child and running away with it, clutched in her hands. Waking up, Mrs Ariyo went to the hospital only to deliver a dead baby. This horrific episode repeated itself nine additional times in her life, forcing the distraught woman to bury ten children in nine years. Realising that this was not a natural situation, Mrs Ariyo and her husband decided to travel to The SCOAN for an encounter with our Lord, Jesus Christ. 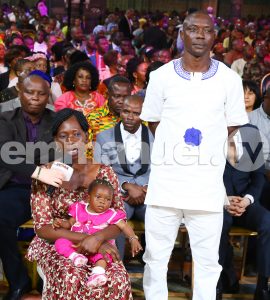 As she stood in The SCOAN, Prophet T.B. Joshua passed by and placed his hand on her head in prayer, in Jesus’ name. That one touch broke every chain of satan in her life and released her breakthrough! Mrs Ariyo testified that the nightmares ended immediately and shortly after returning from The SCOAN, she conceived and gave birth to a beautiful baby girl. Her husband, in a joyful mood also gave thanks to the Almighty Father for setting his family free from the captivity of satan. He said that though he had been advised to look for another woman to marry, he refused – believing that God would surely see them through. They depended solely on the Word of God and God made His Word good in their lives, in Jesus’ name. Testifying that their sorrow had been turned to joy, they returned glory to God by naming their child, Perfect Testimony Ariyo!