OUR PURPOSE IN LIFE - The Synagogue, Church Of All Nations - SCOAN - Prophet T.B. Joshua (General Overseer) Skip to content 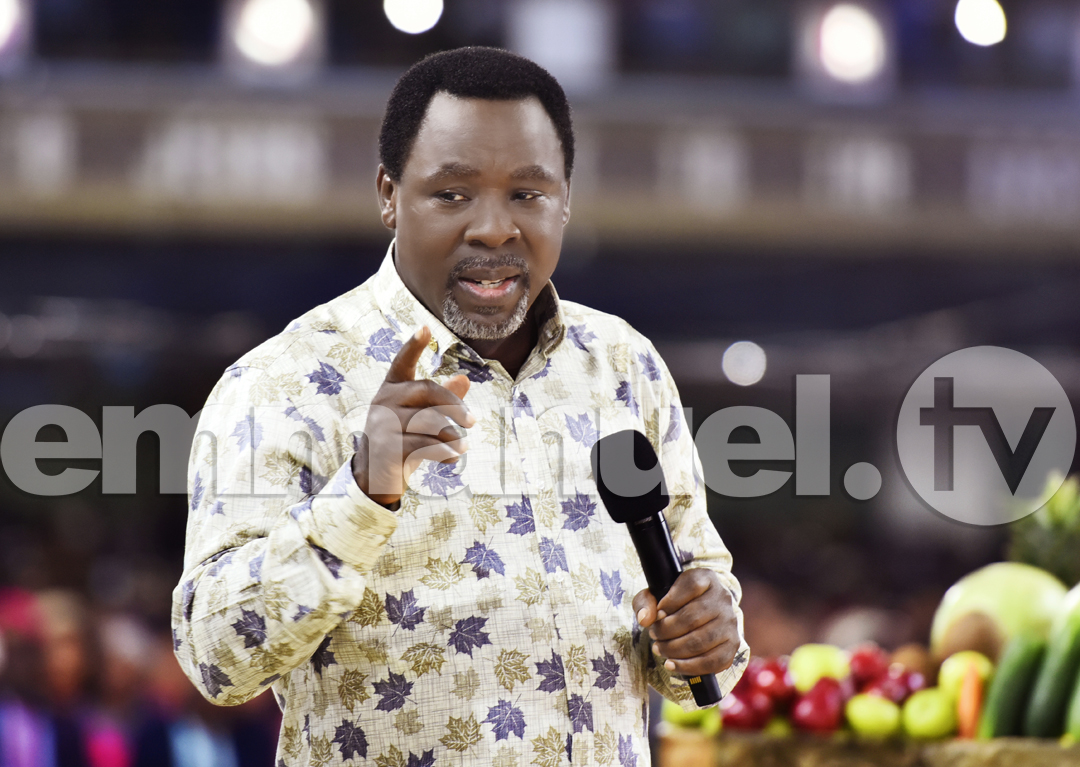 Another intriguing SCOAN Sunday Service was broadcast live on Emmanuel TV drawing both believers and the curious to the Christian station to witness for themselves the omnipresent power of God in action.

The prophet spoke explained that many of us paint a picture of our situation by our appearance and countenance. “How can your situation dictate your direction and rule you? The man that is poor is the man that has no vision. You can know if a man is truly a child of God because real movement brings excitement and the promise of God brings hope and expectation.” Therefore, as a true child of God, whether there’s food on the table or not, whether there is money on the table or not – they will be happy and excited!

Evangelist Anne also gave a word of encouragement in a message titled: Learning To Live In The Natural World. In a humorous 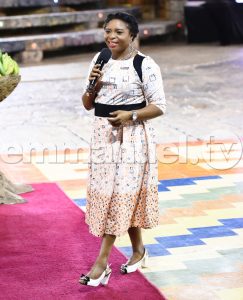 demonstration, we were reminded of how we try to fight our spiritual battles in the flesh whereby, “When we are driven by intellect, feeling or emotions, we renounce our faith in the Word and deny it in action”. She spoke about the three spirits – God’s Spirit, man’s spirit and evil spirit. She reminded us that we are free moral agents who have the right to choose to yield to either God’s Spirit or evil spirit. Quoting Prophet T.B. Joshua Evangelist Anne said, “This Easter, the key is not to suppress the flesh but to surrender to the Spirit.”

The Easter season serves as a reminder of what Jesus did for us, paying the ultimate price at the Cross to set us free from our sins. We, as believers must endeavor to stay far from that which is against God. In this message a key truth was given: “The best antidote against the poison of sin is to walk by the Spirit.”

After such words were spoken, testimonies of all kinds rang out, letting the world know that Jesus lives and He never said good-bye! Below are a summary of them: 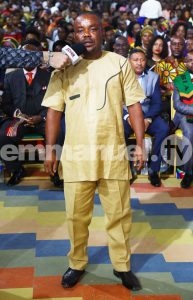 As a mechanic by profession, Mr Ozoemena Pepple was unable to work due to lumbar spondylosis that sent pain around his chest, neck and back making him unable to bend, stand and move freely. After trying a number of solutions, Mr Pepple was given a neck collar to restrict his movement to reduce the agonizing pain.

Mr Pepple started praying along with Prophet T.B. Joshua on Emmanuel TV and after encountering the prophet praying for him in a dream, he decided to come the arena of liberty to be healed. True to his dream, Prophet T.B. Joshua prayed for him and as he laid his hand upon Mr Pepple his pain disappeared. He demonstrated his free movement now without pain after being healed, in Jesus’ name. He advised others to “Believe in God and believe in those sent by Him and it will be well with you, in Jesus’ name”.

OUT OF HIDING INTO THE LIGHT! 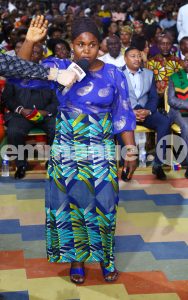 “This started four years ago”, Ms Ididapo explained. After mysteriously losing her pregnancy after being shot in her dream, “the bleeding started”. She had journeyed to many places in search of solution but none had come, until last Sunday, when she was ironically hiding herself at the back seats in The SCOAN, trying to conceal the bleeding she had become accustomed to. “I saw a woman in a hidden place – she is bleeding. Come out, don’t hide your testimony.” These were the words of prophecy spoken by Prophet T.B. Joshua that brought Ms Ibidapo Temidayo out of her hiding place to give glory to God.

This week Ms Ibidapo boldly testified that “After the prophecy, everything stopped!” The prophecy was Spirit filled indeed and brought an end to the flow that couldn’t be stopped by man’s natural means. To God be the glory!

RESCUED AT THE POINT OF DEATH!
“Satan gave me a death certificate but Jesus Christ tore it up and gave me life again,” Mr Omobunde Elisha Omobule excitedly told the congregation. The retired air force commander was brought to The Synagogue, Church Of All Nations in a vehicle with swelling throughout his entire body, further complicated by hypertensive heart disease. The inflammation was so severe that he could not even walk. The area most affected was his scrotum which bloated to an alarming degree, almost reaching his knees. With the family fearing death was nigh, they knew Heavenly intervention was required. 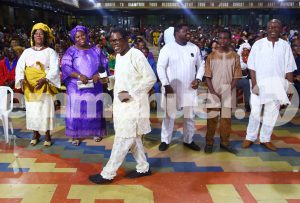 Seeing Mr Omobunde’s pitiable condition, Prophet T.B. Joshua sent evangelists to minister the New Morning Water to him. Incredibly, he began to walk unaided immediately after the ministration! Shortly afterwards, all the swelling began to remarkably reduce – until the point that his body size returned to normalcy. “God has given me another chance to live again,” he told The SCOAN congregants. “I will forever remain grateful to Him and His servant, Prophet T.B. Joshua.”

PROPHECY SIGNALS RELEASE FROM KIDNAPPERS DEN!
As Prophet T.B. Joshua ministered to the congregants during a Sunday Service, he prophesied to an elderly man: “They kidnapped your son. They will release him”. That Word from Heaven signaled the release of Chief Chukwuemeka Ezeogwum’s son from the kidnapper’s den. 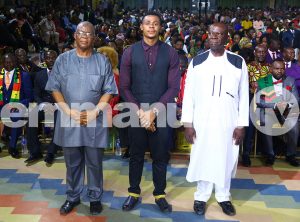 Narrating the whole incident as he testified of his son’s release, he said it was on a fateful day, his son, Kingsley failed to return home from work at the expected time. As he neared the Police Station where he had gone to make a report, he sighted his son’s vehicle parked there. Then came the devastating news from the Police that the owner of the vehicle had been kidnapped. Realising the need for God’s intervention, he decided to come to The SCOAN and the Lord located him through words of prophecy. Chief Ezeogwum further testified that immediately after the prophecy and prayer from the man of God, he received a phone call from his son, Kingsley for the very first time since he was kidnapped.

Testifying after his release, Chief Ezeogwum’s son, Kingsley said he was overtaken by a group of kidnappers who forced him into their vehicle, blindfolded him and took him to their den. He was severely beaten, starved of food and tortured for two weeks. But suddenly, a member of the gang walked up to him and told him that he should continue serving the God he was serving. It was a sudden change in the attitude of the gang towards him as they stopped the beating and started giving him food. They washed his clothes, returned all the items they had seized from him and gave him some money to transport him back home. By the time Kingsley got home, it was a shock to discover that the period the man of God prophesied to his father regarding his situation and went on to pray for him was the same period the countenance of the kidnappers towards him changed and he was eventually released!

I CAN BREATHE AGAIN! 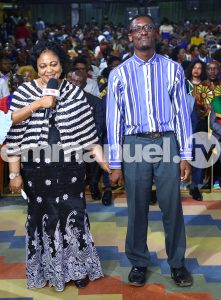 Mrs Gift Duwii, a Nigerian based in USA, came to The SCOAN in a critical condition. She was entirely dependent on the use of an oxygen machine after the doctors diagnosed fluid in her lungs. Booked for an operation as the only viable medical solution, she first decided to visit The Synagogue, Church Of All Nations (SCOAN) in Lagos, Nigeria to seek Divine intervention. As Prophet T.B. Joshua prayed for Mrs Duwii, she fell suddenly to the floor under the healing influence of the Holy Spirit. Rising up, she removed the oxygen and began breathing normally! “Since Prophet T.B. Joshua prayed for me, I have not used any oxygen at all,” she excitedly testified before the congregation. Her son stood by her side to appreciate God for the wonderful healing his mum received!

WE USED TEXT MESSAGES TO COMMUNICATE – HUSBAND AND WIFE…
Their marital situation degraded to such a critical level that Mr and Mrs Nhalpo stopped verbally communicating in their own home. “My wife would send me text messages whilst in the same room with me,” Mr Nhalpo explained, explaining how all affection had died and a once happy home had practically become ‘hell’. 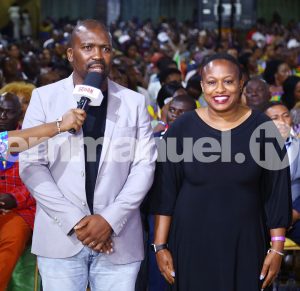 The root of the crisis was “a spirit of woman” which entered Mrs Nhlapo while she was in university. A sexual encounter with a fellow female paved the way for satan to ensnare her heart, turning it away from her husband. Threatened with the looming prospects of divorce, the troubled duo decided to visit The Synagogue, Church Of All Nations (SCOAN) to seek God’s intervention. There, prophetic words spoken by Prophet T.B. Joshua rewrote the history of their marriage!

“You have a strong crisis in your marriage,” he told the couple. “The affection for your husband is dead because of this spirit of woman,” he further prophesied to Mrs Nhlapo! That moment signaled the end of the crisis! The bitter experience of marriage became sweet as hatred was replaced with love and misunderstanding with understanding. Testifying, Mr Nhlapo told congregants at The SCOAN, “I have now regained my kingship in the eyes of my wife”. Truly, old things have passed away and all things have become new for the South African couple. 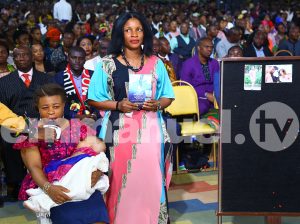 News that would inspire joy and celebration in every home was suddenly beset by grief and tears. That morning in November 2017, Mrs Enobong Akpan went into labour. Her family rushed to the hospital, full of anticipation to welcome the newest member of their family. However, the joy was soured by the news she required an emergency surgery to ensure safe delivery.

Anticipation turned to anguish as doctors returned, informing the family that while the baby had been delivered, the forceps had entered the baby’s skull, exposing her brain. A great hole had been created at the back of the new-born baby girl’s head, with a large section of her tiny brain horribly exposed. In desperate search for a solution, Mrs Akpan’s sister, Mrs Nkoyo Udo rushed to The SCOAN to receive prayer for the little girl and a bottle of the New Morning Water.

Returning, she ministered New Morning Water in Jesus’ name on the baby’s wound. That night, Mrs Udo dreamt that Prophet T.B. Joshua was asking her to bring the baby. As she brought her, the Prophet placed his hand over the wound and prayed, declaring that she had been healed in Jesus’ name. Four days after that dream, the only reminder of the large hole was a small red spot at the back of the baby girl’s head! Showing her beautiful baby girl, Destiny Akpan, to the congregation, Mrs Akpan told the congregation that when she put her problem in God’s hands, He took complete control and restored her life and the destiny of her little child, in Jesus’ name!