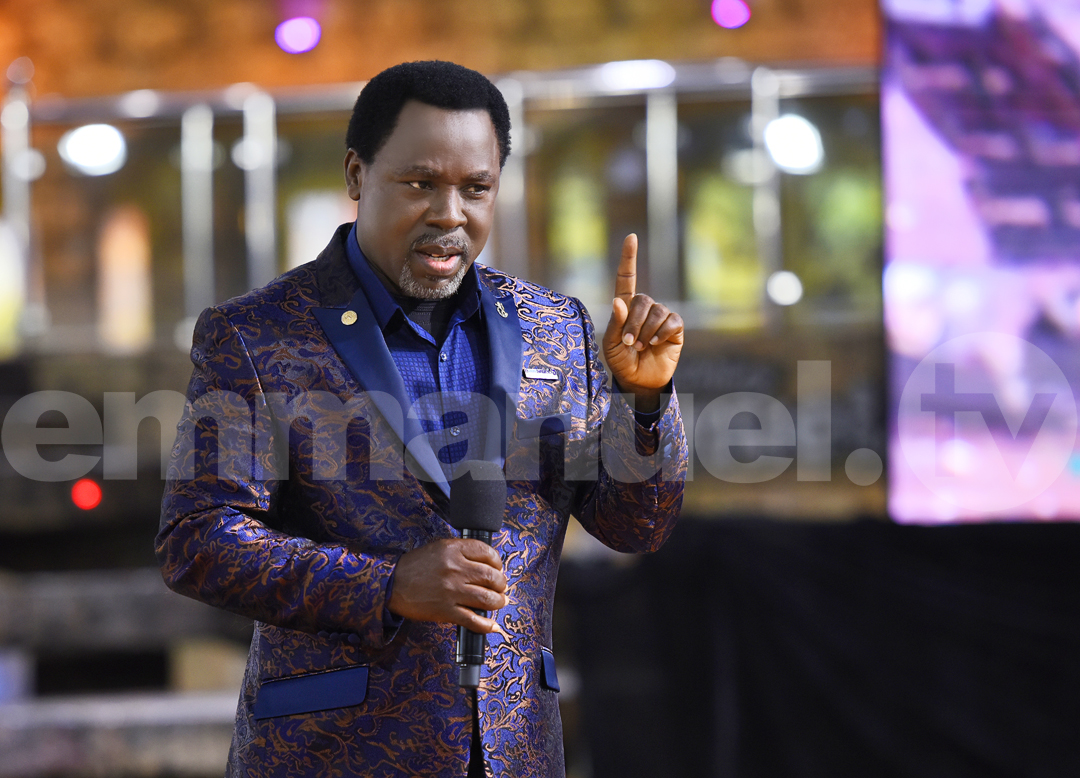 Sunday 11th February 2018 was another glorious day in God’s presence for all in attendance at The Synagogue, Church Of All Nations and the millions more who joined the broadcast live on Emmanuel TV. The Word of God was preached with power, opening the doors of people’s hearts to receive all that Heaven had in store for them in the course of the electrifying service.

Evangelist Anu opened the stage with a sermon titled, ‘GOD SAYS IT IS ALL OVER’ which focused on the need for Christians to stop taking journeys into yesterday in order to realise their true potential and become all God has destined for them.

“Yesterday is history, today is opportunity and tomorrow is mystery… If your past must be over, you have to outgrow it. If you desire to focus on your future, you must first conquer your past. You must be a forward looker; you cannot look at two different directions at the same time.” 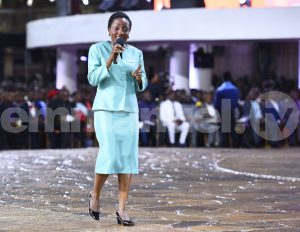 She concluded by stressing that people should “stop combining” where they are coming from with where they are going. “Man cannot discover new oceans if he has not lost sight of the shore. We are to run a straight race with the Lord. To run that race, you must not look back. You cannot make spiritual progress by looking back. If you continue to look back you can never be stable in your spiritual walk with the Lord, so discovery is for forward lookers.”

Thereafter, Prophet T.B. Joshua gave an inspiring message on how Christians should deal with the issue of offence. “Honestly, offence in itself is not deadly if we don’t harbour it. It becomes deadly if we hold or keep it in our hearts,” he told the congregation.

“The problem is that when we get offended, we hardly realise that we are trapped. The devil makes us to focus on the wrong done to us and forget the reality – which is the consequences of being offended.”

Prophet T.B. Joshua then explained how offence, if not dealt with, easily produces fruits such as hurt, anger, bitterness, strife, hatred, resentment, envy, jealously and division.  “Nowadays we seem to experience more division among believers, leaders and congregations. The reason for this is that offense is very common due to lack of real love. Real love forgets wrongs so that there is hope for the future. In the face of true and genuine love, offenses cannot stand. What is offense in the face of true love?”

Concluding, he encouraged congregants and viewers worldwide, “You will receive in a moment what you have been seeking for years when you let go of offence.”

The sermons were interspersed with faith-building testimonies. Here is a snapshot of them: 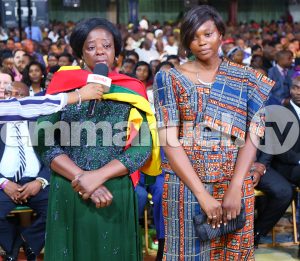 Imagine what it would be like to live in a world without sound? For Mrs Bertha Abla Ahadzi, a Ghanaian national resident in France, the grim reality of her steadily decreasing hearing was that she could no longer live a normal life. Simple tasks such as interacting with others became a burden. Her hearing impairment especially affected her family and strained the relationship because the hearing aids she used were not adequate in efficiency enough to enhance her hearing ability. 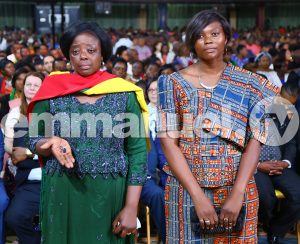 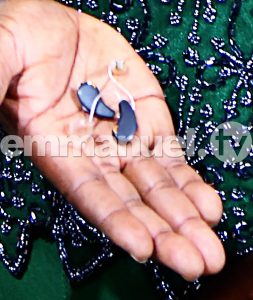 Deciding to visit The SCOAN, Prophet T.B. Joshua prayed for Mrs Bertha Abla Ahadzi in the name of Jesus Christ! Immediately, to the glory of God, she answered to her name instantly and began to communicate freely without the hearing aids – much to the amazement of her daughter who accompanied her. Returning to share her testimony, she advised the congregants and viewers all over the world to always seek for solution in Jesus Christ!

WARNING: THE DANGERS OF PORNOGRAPHY!!! 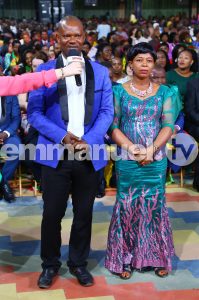 For 18 ugly years, Mr Emeke Okeke struggled with an addiction that affected every aspect of his life. Introduced to pornography as a young man, what started as a few magazines grew with the advent of technology to something he downloaded online on a daily basis. His first marriage collapsed, as did his second. His third marriage was on the verge of breaking because his lust for pornography robbed him of all affection for his wife.

Realising that there was no way he could free himself from this problem, the couple decided to come to The SCOAN from Enugu to seek the face of God for deliverance. Upon coming to The SCOAN, Prophet T.B. Joshua prophesied exactly to him about the nature of his secretive addiction. 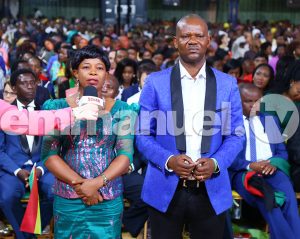 Confirming the prophecy, Mr Okeke admitted that some of his online girlfriends were contacting him whilst in the Church. One week later, a beaming Mr Okeke testified that the lustful urge for pornography had “completely gone.” “Now, the affection with my wife has been restored,” he excitedly told the congregatns before advising young people on the dangers of watching such content.

THE MAN WHO RECORDED “AN ANGEL” AT THE SCOAN EXPLAINS HOW IT HAPPENED! 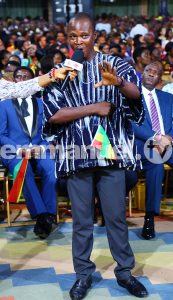 A video was uploaded to YouTube in January 2018 showing a flashy figure in white crossing the road and entering inside the premises of The Synagogue, Church Of All Nations. The video sparked huge debate on social media and subsequently went viral, with many people agreeing that an “angel” had been supernaturally captured on camera.

Today, the individual who actually filmed the remarkable footage was present in the Church to share his experiences. Mr Hezron Konlan, a Ghanaian, explained that he came to The SCOAN in search of Divine intervention. Due to the multitudinous crowd, he was unable to enter inside the church premises but stayed within the overflow congregation. That day, Prophet T.B. Joshua declared that one’s seating position did not matter before God but one’s faith, stressing that anywhere people sat, the Spirit of God had touched them. Holding fast to his faith, Hezron prepared to return to Ghana the following day. 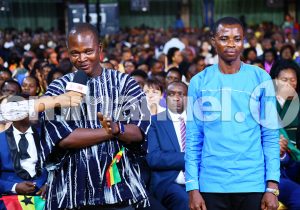 Seated in a vehicle on a road opposite to The SCOAN, he offered a simple prayer in his heart – ‘God, please give me a sign that this Church is from You and my case has been settled.’ Bringing out his phone, Hezron had a Divine intimation to take a video of The SCOAN before returning to his homeland. Suddenly, “I saw a huge figure dressed in white on top of a large animal which can be likened to a horse crossing the road and entering the Church.” Dazed, Hezron looked up from his phone and remarked to his friend Joshua Laar that he had just seen something “physically”. Playing back the recording, Hezron confirmed that his phone had captured the supernatural sighting, which he subsequently shared with his friends. “Since that encounter, my life has completely changed,” the young Ghanaian testified, explaining that he experienced promotion in his workplace and a turnaround in his fortunes. “I was there with him in the vehicle and can confirm this is real,” his friend Joshua corroborated. “Truly, the Almighty God is here in The SCOAN!”

For those who have not yet seen, here is the video in question – https://www.youtube.com/watch?v=iVrFKtu_3mM

FROM CHAIN-SMOKER TO NEW MOTHER! 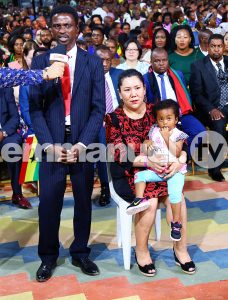 Each new hospital visit resulted in more bad news for Mr Kofi Kwain, a Ghanaian, and his Chinese wife, Fu Yu Hong. The diagnoses differed from low sperm count to hormonal imbalance but the conclusion remained unanimous. There was no medical way the couple could have another child. The duo even tried the complicated procedure of IVF without any sign of change. 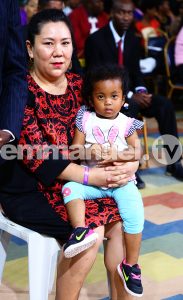 Mrs Hong explained that she “never knew God” whilst living in China but when her husband introduced her to Emmanuel TV, that dramatically changed! Once a chain-smoker, she stopped taking cigarettes and “partying every Sunday”, instead choosing to faithfully watch Emmanuel TV with her husband and believe God for a miracle. As they held fast to faith, the miraculous happened – as Mrs Hong became pregnant! Proudly showing their beautiful baby girl at The SCOAN, the couple advised all barren couples to never stop looking unto the Lord for fruitfulness. 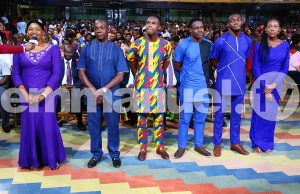 When Mrs. Eucharia Inyang Oko fought with her husband, the whole street was aware! Hell was literally unleashed as the duo would physically combat to the point that their violence became a norm in the neighbourhood. When tensions reached boiling point, Eucharia would physically grab her husband’s private part and in return, he would bite his wife before she would let go. Growing up under such volatile conditions, all four of their children were affected – their second son in particular struggled with a similar violent streak as he grew older. 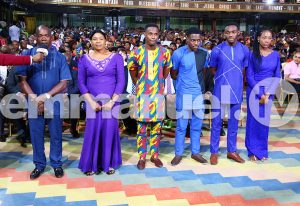 To manage his marital mess, Mr Godwin turned to alcohol. However, under its intoxicating influence, the fights became all the more heated. On several occasions, Eucharia would lock her husband in the house and he would break down the door to escape. As the couple grew older, so did the realisation that this kind of behaviour could not continue. Resolving to visit The SCOAN, they were among the congregation when Prophet T.B. Joshua prophesied directly to Mrs Oko, pinpointing the destructive effects of anger in her life and marriage. Her husband came rushing forward to confirm the prophecy and both were delivered! The following week, the happy family returned to testify to the concrete changes in their lives since the prophecy. The anger has gone, affection has returned and unity has replaced division and strife. Thank You, Jesus Christ! 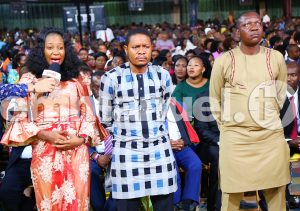 In exchange for his ‘help’, Mrs Betty Jonathan would break bottles and wave knives, in her husband’s face causing Mr Jonathan to send his wife out of the home. Concerned about his kids, Mr Jonathan ensured that his troubled wife had cash to take care and a roof over their heads.

Realising her wrong, with tail between her legs, Mrs Betty would come back begging her husband, to which he obliged. But when Betty gave birth to their second child the violence began again. She left the house again, this time abandoning the kids. 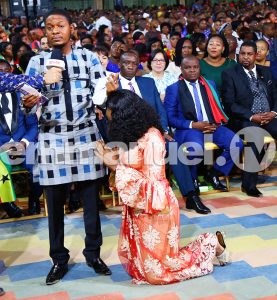 Mr Jonathan declared that she would not return to his home unless she received deliverance. A year later, deliverance came when Mrs Betty Jonathan came to The SCOAN and she received a touch from Prophet T.B. Joshua, in Jesus’ name that set her free from the wicked violent spirit that had almost completely diminished the marital home.

After receiving a call from The SCOAN and hearing a new tone in Betty‘s voice, Mr Jonathan knew that deliverance had finally come. He came to The SCOAN with his sister who had cared for his children in his wife’s absence. 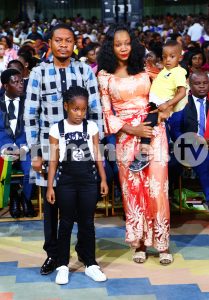 Seeing them for the first time in just over a year, Mrs Jonathan scooped up her children in her arms remorseful of what the evil spirit had pushed her to do. She said that since the deliverance she now respects her husband and cherishes him so much. Grateful to God the couple promised to make God’s Word the standard for their marriage and advised others to always include God.