Are You A Faith Man Or Woman? - The Synagogue, Church Of All Nations - SCOAN - Prophet T.B. Joshua (General Overseer) Skip to content 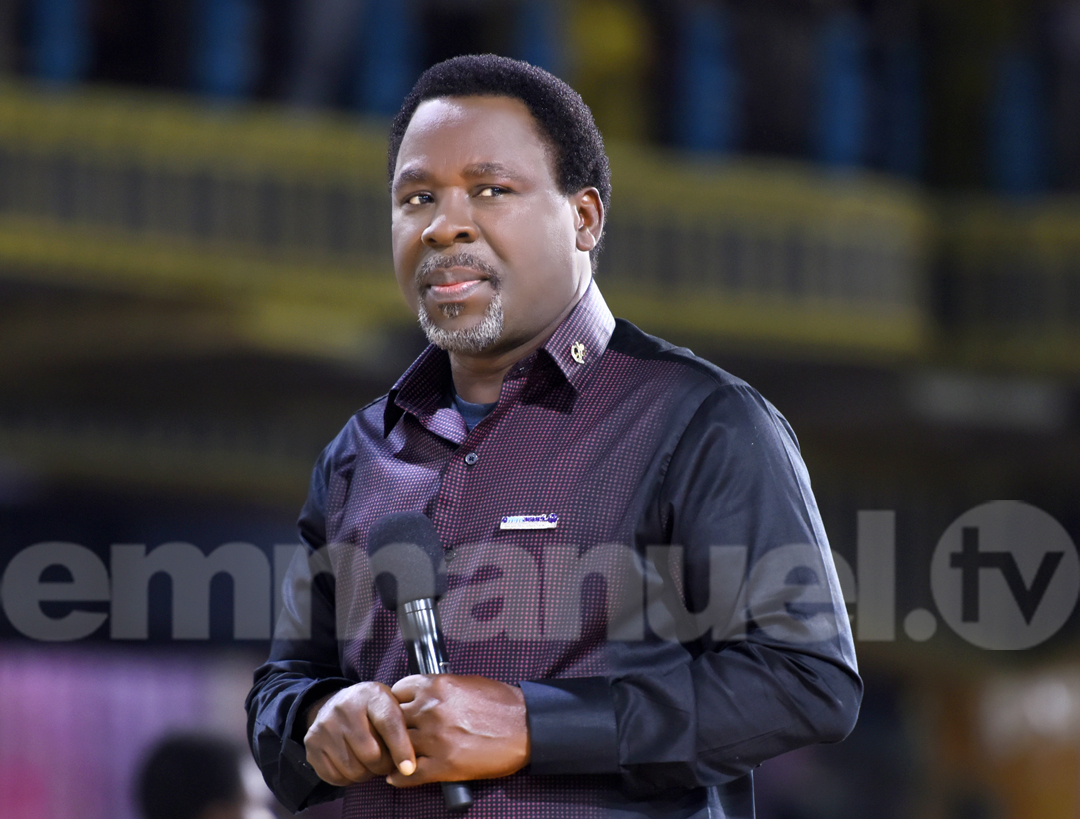 The atmosphere at The SCOAN on Sunday, the 28th of January 2018 was electrifying as the choristers gave faith lifting renditions and the congregation happily worshipped. One could easily sense the presence of God all over the auditorium and beyond. To crown it all, the man of God, Prophet T.B. Joshua gave an engaging message centered on faith. He explained that as Christians, our heart is God’s prayer room and a contact point for the Holy Spirit. “Faith is of man’s heart. If you say you are a faith man, it means you are using faith words to bring faith results. If I’m saying words, I’m using faith in faith, not faith in the finished works of our Lord, Jesus Christ”.

Prophet T.B. Joshua asked the congregation a very thought provoking question, “What are you doing with your heart? Have you forgiven those who have sinned against you? Is your heart holding pain of the past, envy or jealousy?”

On a final note, he urged them to reconcile, emphasizing on the fact that whether they are right or wrong, they have no right to hold offence. “If you hold a grudge against a brother, you have already grieved the Holy Spirit”. 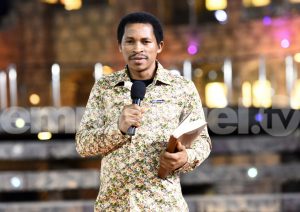 Earlier on, Evangelist Daniel delivered a message titled, Judge Not in which he talked about how God in His infinite mercy has written us into an unprecedented and revolutionary story of reconciliation where hostilities are destroyed and enemies become friends. He enjoined all not to reject anyone on account of his or her weakness, citing the biblical example of how God looked at Moses, a murderer and saw in him a deliverer. Also, God looked at David, a shepherd boy and saw in him a destined  king. This goes to show that as humans, we cannot tell by the present signs what the future holds.

I CAN SENSE GOD’S HEALING TOUCHING YOU 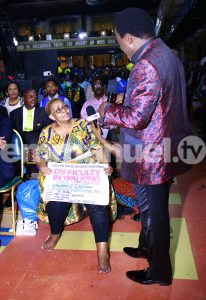 Mrs. Ella Mosala from South Africa, visited The SCOAN and came before God with her burden of 16 years of excruciating pain from lumbar spondylosis, arthritis of the waist, knee and thighs. She said as a teacher, life became extremely difficult as she could not participate in physical activities. The surgical operation she had and the lumbar corset recommended by the doctors to help aid her movement and ease the pain never produced any permanent solution. The constant pain and frustration led to her finding out about Emmanuel TV as the last Bus Stop her heart had yearned for.
As Mrs. Ella Mosala was seated and anxiously waited for her healing, the man of God Prophet T.B. Joshua walked towards her and in very simple words spoke to her thus: “You don’t know how much you love Jesus.”
Mrs. Ella Mosala looked up as the Prophet spoke. “You want to know how much you love Jesus?” the man of God continued. “By attending to His Word and allowing His Word in the midst of your heart.”
“Come on!” Prophet T.B. Joshua called on her, explaining that he said, “Come on!” because he could sense God’s healing touching her. 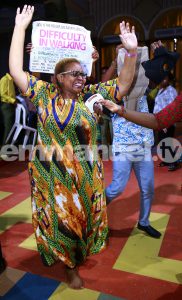 Immediately after the man of God spoke and without touching her, Mrs. Ella Mosala rose to her feet and hurriedly removed the knee brace and lumbar corset she wore, saying she could bend down 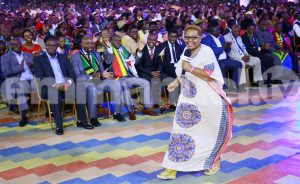 and demonstrably danced as she filled the atmosphere with her ‘Thank You, Jesus’. Mrs Ella Mosala told the congregation that her pain of 16 years disappeared instantly after the prophet spoke the Word of God. Walking in her freedom in high platform shoes to the glory of God, she advised all to “love God with all your heart and trust in Him”. 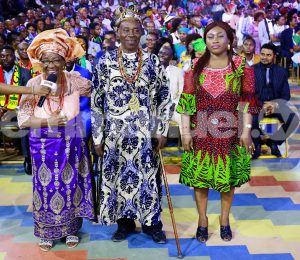 Seeing the caption of HRH Josephine Emejiaka before she received her healing, one would hardly believe she was the same person standing and happily sharing her testimony before the children of God during the Sunday Live Service. It was indeed a radical transformation in her life after the healing touch of God working through the New Morning Water.
Full of appreciation to God Almighty, HRH Josephine Emejiaka recalled the pains and agony she went through for many years as a result of lumbar spondylosis, severe hypertension and peptic ulcer. As a retired nursing officer in the military force, it was not an easy task. A once agile woman suddenly becoming incapacitated, hardly able to move around was a totally devastating experience. According to HRH Josephine, she went to many hospitals, even contacted medical personnel oversees, including India. What they uniformly recommended was a surgical operation. While still deliberating on what to do as the medical bill was on the high side, she got to know about Emmanuel TV. As she watched the miraculous happenings, she decided to come to The SCOAN. 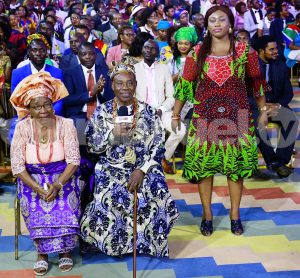 As she was seated in the auditorium that Sunday with a lumbar corset round her waist and the terrible pains she was going  through written all over her face, the evangelist sent by Prophet T.B. Joshua were ministering the New Morning Water to the congregants. When she was ministered, she stood up and began to walk majestically to the glory of God.
Her husband, HRM Emejiaka also testified of the great change he had seen in his wife’s life likewise their daughter who flew in all the way from the U.S.A. to accompany her mum to The SCOAN for her healing.
Today, the pains and agony of many years have come to an end through the Master Healer, Jesus Christ!
Advising viewers all over the world, HRH Josephine Emejiaka urged everyone to believe and trust in God. With God, all things her possible.

IN GOD’S TIME EVERYTHING BECAME BEAUTIFUL IN THEIR MARRIAGE 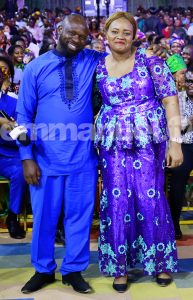 As Prophet T.B. Joshua was casting out every handiworks of demon in the lives of the people during a live Sunday Mass Prayer, a lot of people began manifesting. Among them was Mrs Flora Declan Uzochukwu whose husband followed her out to confirm how the demon had affected their marriage.
Mrs Flora was emotion laden as she narrated how joyful she felt in gaining freedom from the torment of a spiritual husband. She said the problem started after she got married. She would see a spiritual husband sleeping with her in the dream. After those horrific dreams, she would feel irritated by the slightest trivial things, constantly angry, lonely and she would fight at every little opportunity with anyone who came her way. She fought her husband regularly. She said the marriage was even at the verge of divorce if not for the timely intervention of visiting The SCOAN and receiving her deliverance during the Mass Prayer offered by Prophet T.B. Joshua. Since then, Flora said she has not had those horrible dreams and she now has affection for her husband and respect for people around her. Mr Declan was so elated and narrated his painful experience saying, ‘people would admire us not knowing we were living a life of pretense’. He said he had to constantly avoid confrontations with her so as not to inflict her with any injury as they were living in a foreign country, Germany. To the glory of God, he brought her to The SCOAN and she was delivered.
He advised: “Don’t reject anyone on account of their weakness for in God’s time, everything is beautiful”.

“There is a woman here, you bedwet all the time,” were the words of prophecy Prophet T.B. Joshua gave that located Mrs Mary Emeka and positioned her for the deliverance that freed her from the embarrassment she had endured over the past several years. 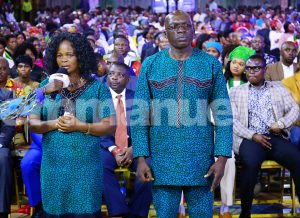 Mrs Mary Emeka and her husband came to The SCOAN to testify to the goodness of God in their lives during the Sunday Service. Whenever she dreamt she saw a spiritual husband who used the face of her husband and slept with her, thereafter she would bedwet. Because of this bedwetting, she hardly travelled. This made her cry a lot and the husband caringly consoled his wife, and told her God will step in. After the prophecy and deliverance, the bedwetting ceased immediately. No matter how much water she consumed in a night before going to bed, she never left the bed soaked again. The spiritual husband, who stole her social and happy life, also left her life, thanks for the deliverance she received at The SCOAN.

Prophet T.B. Joshua gave Mrs Amegan Carine a word of prophecy which said that she was lonely. True to the prophecy, Mrs Amegan Carine came to The SCOAN due to the various problems she had with her husband, Mr Azomedon Leon. She was very bitter towards him, to the extent that she did not want to see him prosper. As a result, she decided to curse him that he should not prosper and the curse began manifesting in her husband’s life. 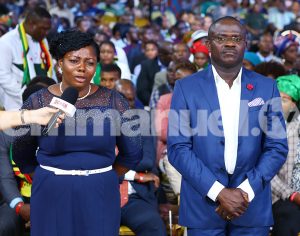 Carine began to hate anyone who had an amicable relationship with her husband. She then began experiencing health problem. Within her, she knew that something was wrong with her. Later on, she decided to visit The SCOAN. Her prayer was for her deliverance and reconciliation with her husband.

After receiving the prophecy from Prophet T.B. Joshua, she was delivered. She testified that her heart had softened and immediately, she realised the need for her to receive forgiveness from her dear husband. When God speaks, changes are beginning.

Mr Azomedon Leon confirmed that after Carine’s deliverance, things began changing to good. Indeed, the Gospel of Christ challenges and changes everything – their relationship and affection have been restored to the glory of God.

Mr Azomedon advised all couples to learn to forgive, be patient and seek solution to their problem from the Lord.