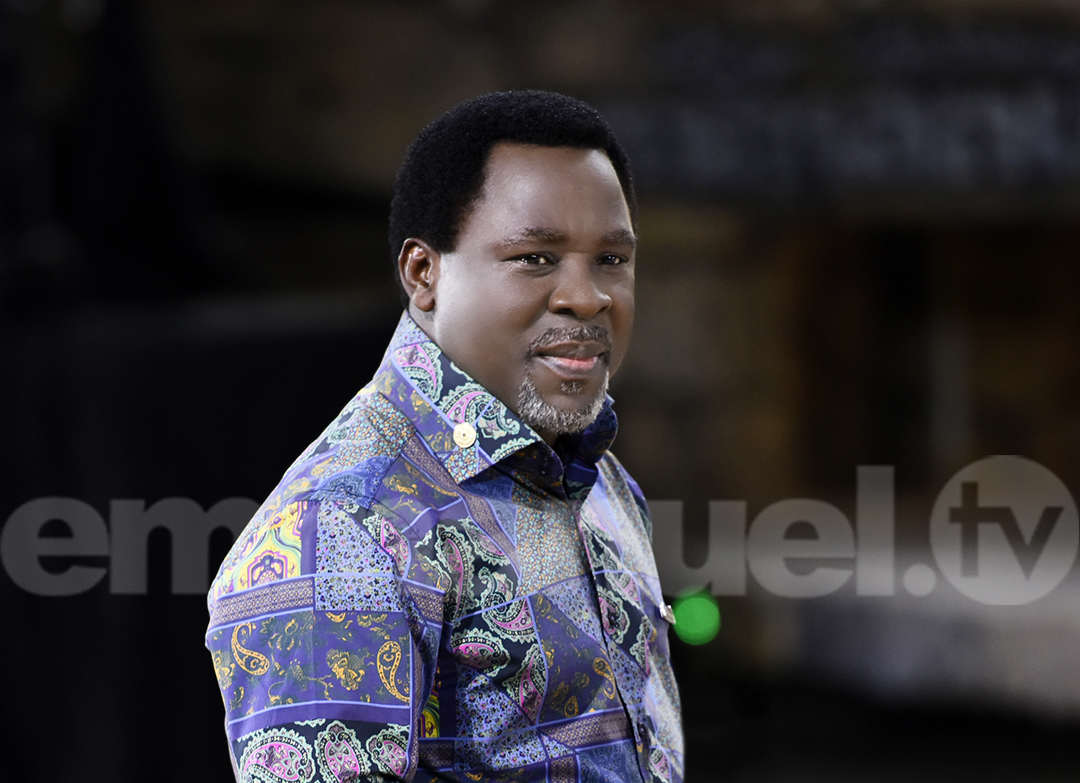 Hope was rekindled, faith was lifted high and hearts were filled with joy as the presence and power of Almighty God dominated The SCOAN Sunday Live service. That joy was confirmed through an inspiring message from Prophet T.B. Joshua. In his message titled ‘Our Conquering power, the man of God said, “The believer should never allow anything to rob him of his joy. That is why you must be a man of faith because joy is a fruit of faith. In this world, trials may test you as a man of faith; they cannot rob you of your joy because joy is your conquering power.” Distinguishing between the joy of the Lord and that of the world, he stated, “Joy is something only believers have. The world may have happiness – that they find in their surroundings and their environment. Without God’s joy, we don’t have joy. The joy of God makes our joy complete. Joy is a fruit of faith. It is a fruit that comes from the recreated spirit – Love, Joy, Peace”.

The man of God also pointed out the need to play our role as Christians: “You have a role to play to free your spirit. ‘Forgive us our sins as we forgive those who sin against us’ – have you done that? We are going into another realm where the pain of the past will not be accepted. Whether you are right or wrong, put everything behind you. Don’t take journeys into yesterday because God will not consult your past to determine your present.” 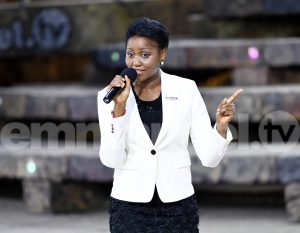 Earlier on, in her message titled, ‘Don’t Give Up’, Evangelist Kimmy, encouraged all who were facing challenges in their faith through her own testimony. Showing the congregation a clip of one of her performances as an International Opera Singer in front of hundreds of thousands of people, she said, “I was your superstar and you were my fans then. Today, I’m telling you that when I was your superstar, I had no peace of heart. You only saw my outside, my inside was yearning for peace. I believed that there was God but I had no faith. I believed that there was a supernatural power that created me but I had no faith.” Citing the Book of Mark 5:25-34 as her proof text she said, “The Woman with The Issue Of Blood cultivated a mind-set of an unstoppable determination. She did not panic or complain, even though her situation was overwhelming. She did not throw in the towel of defeat. To quit was not in her vocabulary. This we can do only when we are full of faith, humility, modesty and perseverance which are the essential characteristics of a woman of vision 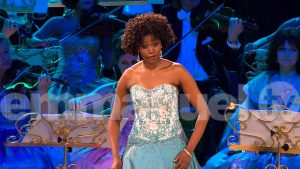 These are just a handful of testimonies that were shared during the service. 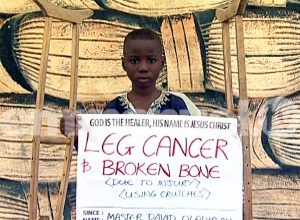 One fateful day, David Oladiran a young boy of 10 years old left home for school and like any other playful child, he loved to socialize with his peers at school. He would mimic karate moves and engage in sparring child-play. Unfortunately, one day, in so doing, his friend hit his leg and David fell with a hard knock to the ground and broke his leg. On reaching home, he complained to his mum of excruciating pain in his left leg which escalated each day.  After three weeks, David’s bone was protruding horridly, cutting and piercing throug

h his skin. After visiting different hospitals and places in search of a solution to the problem, there was only one impending alternative recommended by medial doctors – amputation. 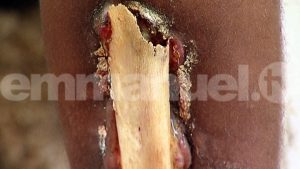 Believing that there is never a problem Jesus Christ cannot solve and never a burden He cannot bear, David’s mum rushed him to The SCOAN. With his crutches, David  was placed at The SCOAN Prayer Line. Prophet T.B. Joshua gave the Morning Water to David’s mum to minister to her son in the name of Jesus Christ. Immediately she did so, for the first time, David stood up and was able to bear weight on his then broken leg, walking by himself without the crutches!

David came back to testify to the goodness of God with a healthy and strong leg. To everyone’s surprise and to the Glory of God, the once protruding, broken bone actually came out of his leg being miraculously replaced with a new bone and the once open wound is now closed and healed. David can now move and freely and live a healthy and active life. He testified with his mum in front of the congregation; they showed the piece of dry bone that had come out, after which God restored a new bone in his leg. 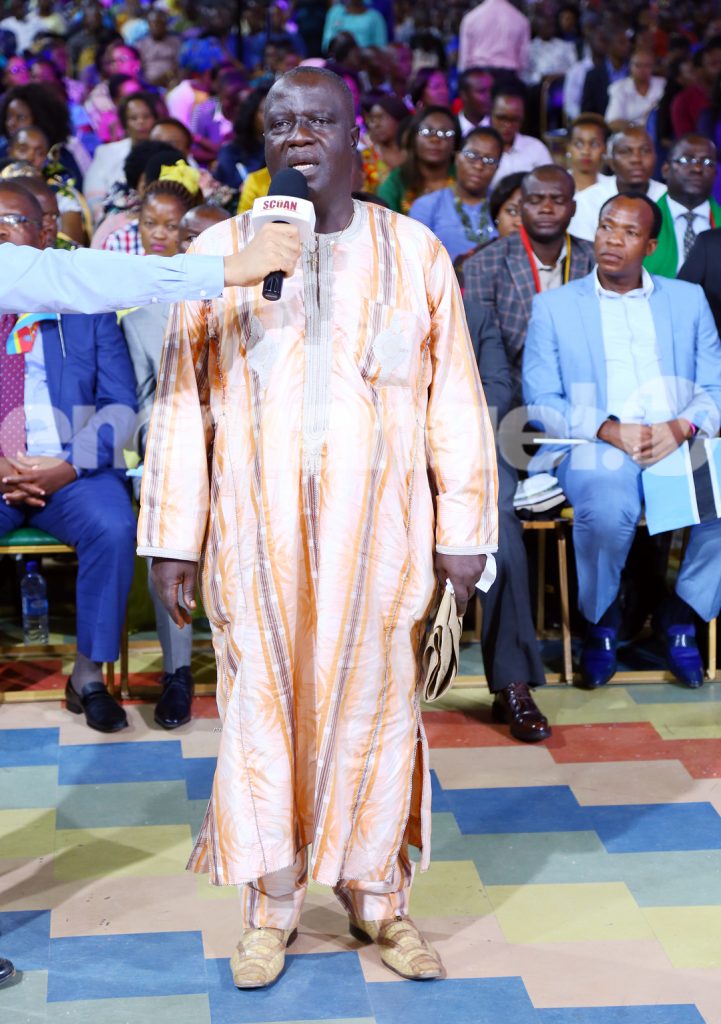 Mr Bege John found himself incapacitated by the problem of difficulty in  walking due to lumbar spondylosis. This problem affected him physically and emotionally due to the severity of the pain he experienced. He went from one doctor to an

other, seeking healing but instead of improving, his case became worse and the pain spread from his knees to his waist and then, all over his body. As a security personnel, his job was on the line as he could no longer perform his duties efficiently.

One day, a colleague at work called him to the locker room and brought out the Morning Water. He explained to Mr Bege how God was using the medium of the Morning Water to heal people and sprayed it on the areas he was having pain. Mr Bege explained that he was relieved instantly and immediately concluded that should visit The SCOAN to seek the face of God. He came to The SCOAN and received a touch from Prophet T.B. Joshua. Mr Bege said he could feel that it was a touch from an anointed man of God. The pain he had lived with for years is no longer and he can now do those things he could not do before. He boldly said that he no longer needs the body supports and threw them on floor before the congregation. He advised people not to doubt God’s ability to heal them. God is the mighty Healer and He is ever ready to heal and deliver us.

BACK ON HIS FEET IN JESUS’ NAME 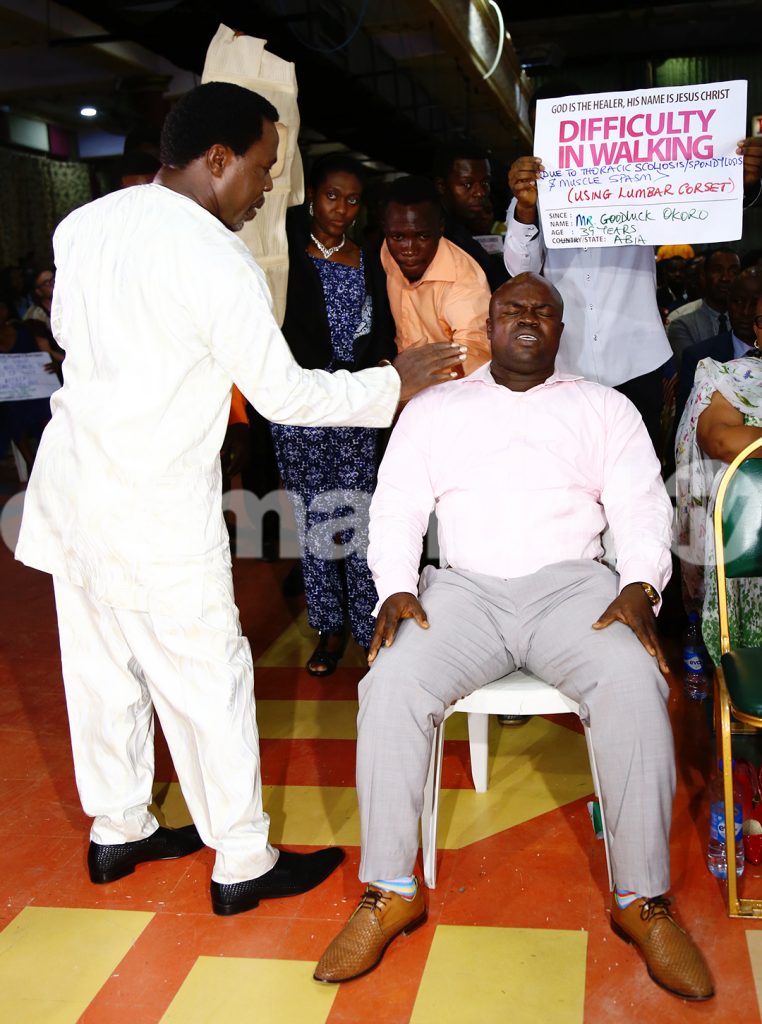 Goodluck Okoro had been ridden with a spinal problem for years. He said the problem surfaced one fateful day when he woke up with numbness in his legs and found that his legs could not carry his body’s weight. Being alone in the house with a stark reality that he could no longer walk, he frantically called his friend who had to jump over his fence to get into the house in order to rush him to hospital. From one hospital, he was referred to several other hospitals where they discovered the problems of thoracic scoliosis, spondylosis and muscle spasms. 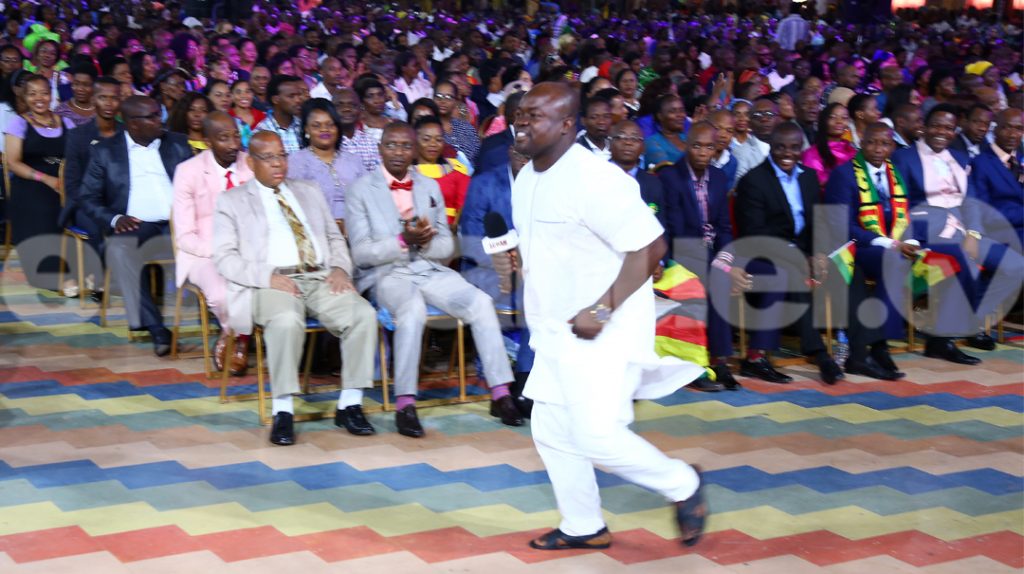 These problems degenerated to the extent that the doctors had no other resort but to book him for an operation in faraway India. While wondering how he would gather the funds to finance such a trip, little did he know that his friends and family had a better solution for his life. They informed him about Emmanuel TV and after watching the power of God, his faith was encouraged to come down to The SCOAN.

On reaching The SCOAN, he received prayer from Prophet T.B. Joshua and felt the power of God surge through his whole body. Instantly, he jumped up and began walking and leaping to the glory of God. Since then, he testified that he has been walking and living in liberty because of Christ. He advised that God is never too late; He is always one step ahead. 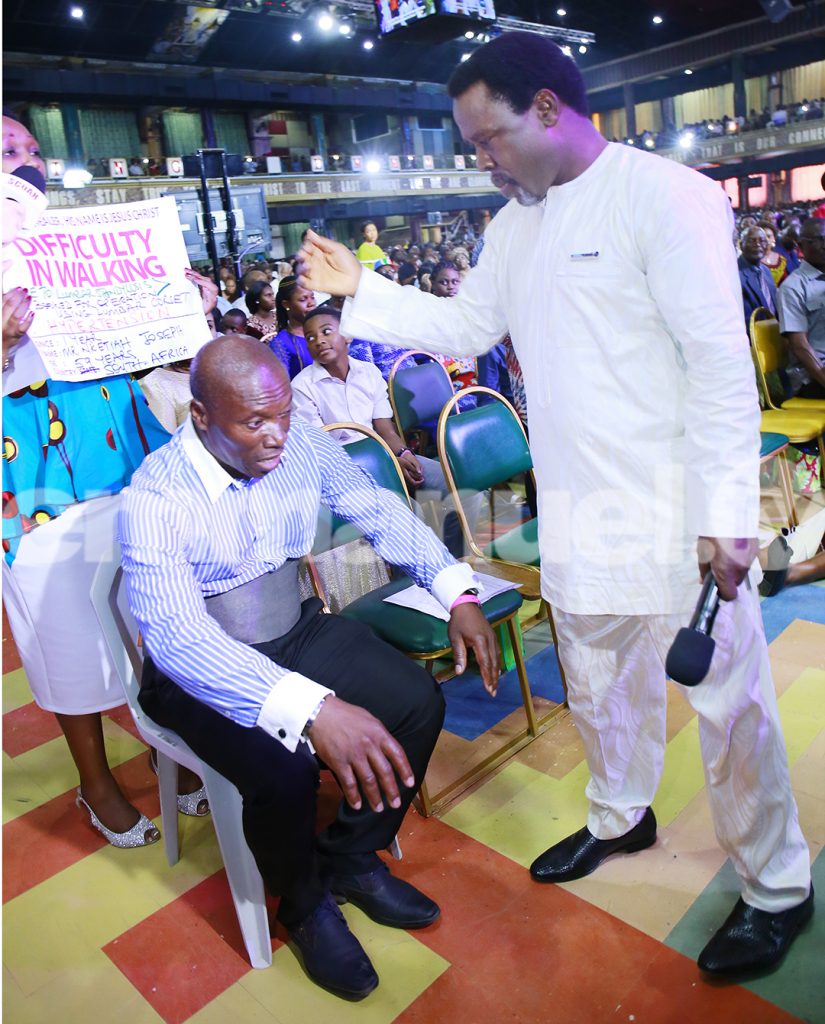 Mr Nketian Joseph, a lecturer from Ghana suffered from lumbar spondylosis and hypertension for many years. His case was so severe that he was unable to walk or stand for long because of the unbearable pain he felt in his waist and legs. The situation became very embarrassing to him as a lecturer who had to stand to give lectures to his students. He would always have to squat or lean on something from time to time. He would be in so much pain that his colleagues at work would advise him to quit the teaching profession. This problem led him to go from one hospital to another in search of a solution. After being introduced to Emmanuel TV by his wife, Mr Joseph decided to come to The SCOAN to seek the face of God for a solution to his problem. 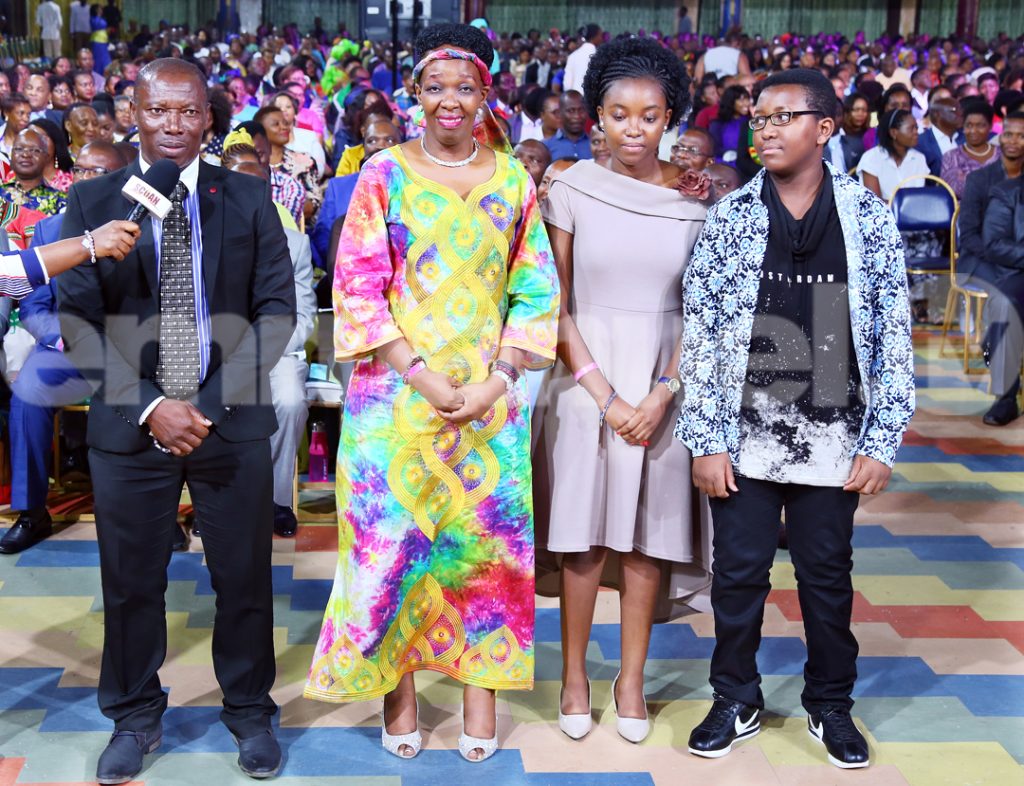 During the service, Mr Joseph received prayer from Prophet T.B. Joshua and that was the end of his many years of pain and discomfort. He explained that immediately the man of God laid hands on him, he felt relieved from the pain he had endured for years. From that day onward, he regained his strength and to the glory of God, he is fully restored to the original position in which God created him.

With a thankful heart, Mr Joseph advised the congregation to have faith in God, He is the final authority settling all problems. 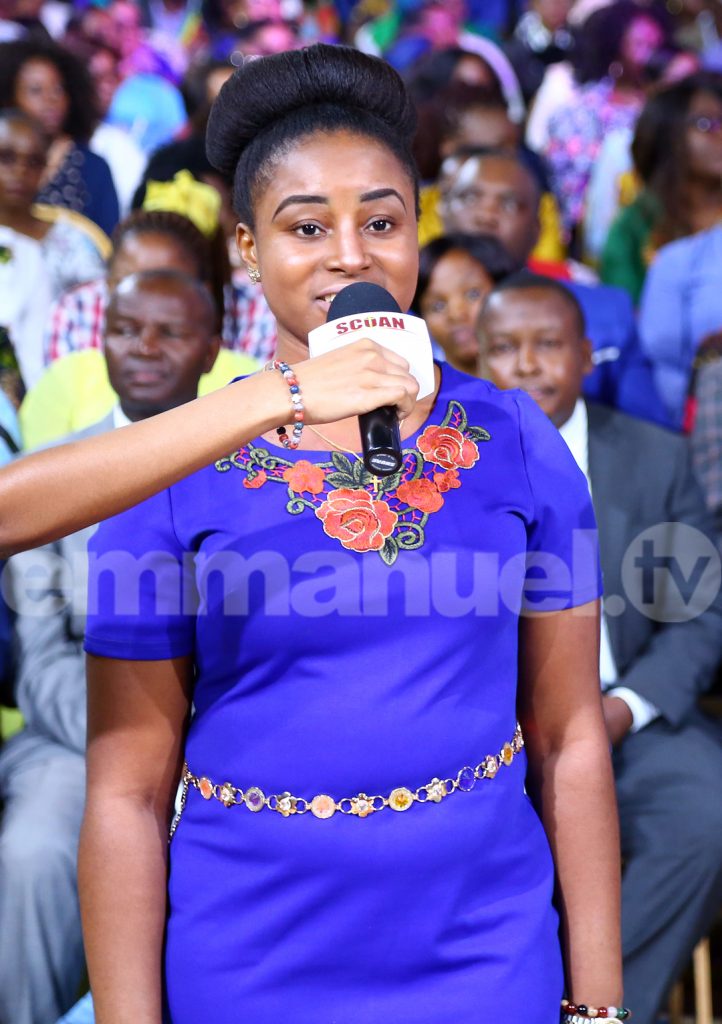 Chidinma Ahuronye came to the SCOAN, broken hearted. She came with the problem of bleeding and in the hope that she would receive a touch from the man of God Prophet T.B. Joshua. She was not however expecting to receive a word of prophecy that stated the exact problem she was suffering from – bleeding. This problem caused her severe pains which drove her to visit many places in search of a solution. Each day, this bitter experience affected not only her social life but her marital life as she would constantly feel weak. She heard of the SCOAN and decided to come for a solution.

During the time of Mass Prayer, Prophet T.B. Joshua prophesied concerning a lady who was bleeding and she said it was as if something phenomenal hit her and she jumped out of the crowd to confirm the prophecy. She went home and said that she realised she was spotless, as the bleeding had stopped. Testifying today, she said like the biblical woman with the issue of blood, she would advise everyone to trust in God and be persistent in faith at all times. 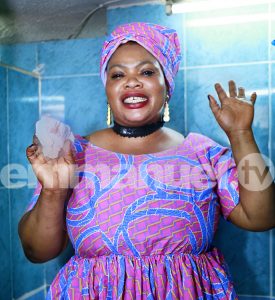 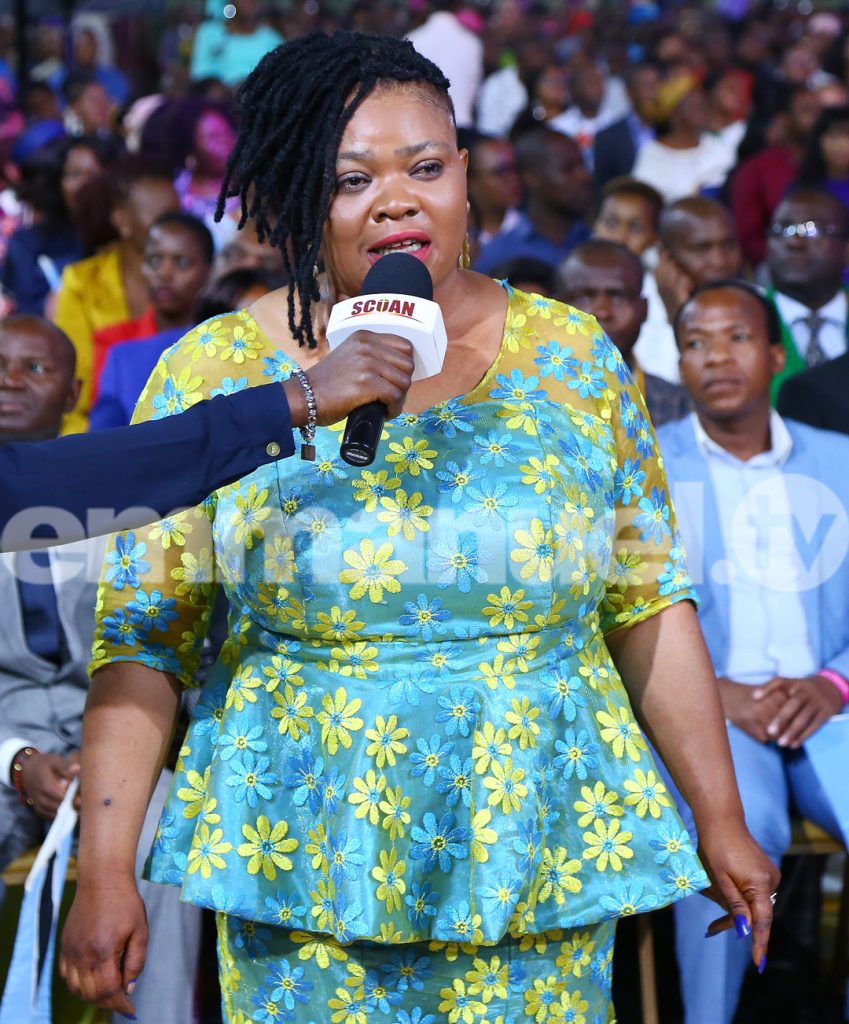 After suffering for two torturous years with ceased menstruation, Mrs Omekara Odinaka wondered if she would ever conceive a child. A fruitless journey to different hospitals proved abortive and she finally decided to seek the face of her Creator. Little did she know that God was busy locating her. To her surprise, last week when she came to The SCOAN, her case was pinpointed through words of prophecy from Prophet T.B. Joshua. Right after the prophecy and prayer she received in Jesus’ name, she went to the toilet and discovered that her menstruation which had ceased, started flowing again! Overcome with joy, she encouraged everyone to trust in God, that with God, all things are possible.