THE FATHER AND SON RELATIONSHIP - The Synagogue, Church Of All Nations - SCOAN - Prophet T.B. Joshua (General Overseer) Skip to content 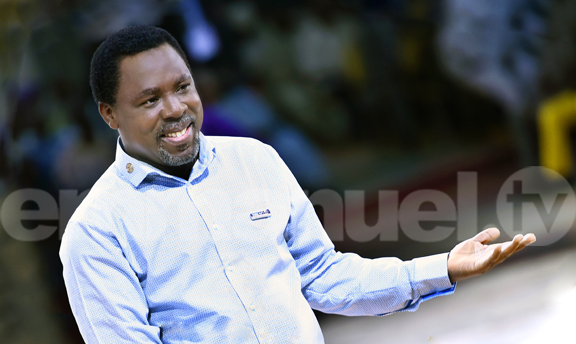 In a powerful, thought provoking message, Prophet T.B. Joshua enjoined congregants to look up to God for direction, adding that self-direction misleads. He warned that as long as Christians continue to cling to their human direction, they would continue to face challenges. “When you wake up in the morning, you need direction. The direction only comes from where? From the heart, where God lives. This is where God dwells, which you can refer to as, spirit. But when you wake up and there is no direction, you make up a direction for yourself. This is the cause of challenges in the world – a made up direction, self-direction”, he said.

As for the coming New Year, he called on the children of God to renew their spirits, adding that without spiritual renewal, their talents, aspirations and blessings may never be actualised. “This coming year you are about to enter, your spirit needs to be renewed. You have everything you need but that is the only thing you don’t have now. You say you are poor. I disagree; you are not poor. You say you are poor because you don’t know how to exploit the things around you. You are in the midst of blessing, money. Money is everywhere. But you need to be renewed to see it”, he declared.

Concluding, he revealed the reason many people continue to roam the earth unnoticed, in spite of the immense talents God has blessed them with. He reckoned that it is only when God is helping us that we can shine with our talents and receive great recognition like a city on a hill that can never be hidden: “Many of you know you have talents and gifts but you are nothing. Your time seems to be wasted anywhere you go. It seems some talents are dormant. Nobody calls for your talent or asks for you. Many are working under those who cannot do anything; they are using your talent but you are working under them. Ask Him to help you serve Him with all your talent. When God is helping you, kings will discover your talent, the palace will discover your talent.”

Earlier, Evangelist Fanny, in a message titled THE FATHER AND SON RELATIONSHIP, urged Christians to see their discipline by God as a corrective measure that is meant to refine them. Referring to the book of Hebrews 12:16, she stated that the situation we are facing is to mould and refine us from our stubborn and rebellious nature. …We are all God’s children in need of correction and immaturity plays a big role to our present state – being unable to maintain a balanced and stable approach to what comes our way every day. 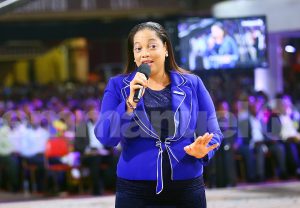 She reminded the children of God that their relationship with their Heavenly father is aimed at their spiritual growth, stressing that such growth can only be made possible when we obey Him. “You can’t grow spiritually without paying the price. Spiritual growth is a function of obedience to God just as intellectual growth is a function of learning that is why knowledge is not the key; obedience is. The purpose of relationship is for help and for strength but when you are not ready, that strength you need from Him cannot be obtained”, she added.

She further lamented the reason our relationship with God is fragmented and usually unstable: “Our relationship is epileptic because we base our faith on experience, we imitate what someone else did. It is imitation that has kept many of us where we are today, that has limited our way, success, movement and gives us to fall into disobedience.” And on how we can maintain a very solid and stable relationship with our Heavenly Father, she offered a panacea: “We must make God our habitation – that is, we must totally depend on Him for everything. We must love Him and acknowledge Him in all our ways. We must relate with Him through constant meditation and prayers.”

she concluded with the fundamental counsel for those who desire a strong relationship with their Father in Heaven: “A man obeys God truly when he brings all his affections, appetites and desires to the throne of God; and when every purpose and passion of his heart and his every act is guided and regulated by the Word of God.  …Meditation in God’s Word is a visit with Him that brings you to a greater relationship I mean the more you meditate, the more you visit Him, the more you develop your Father-son relationship.”

WHERE MEDICINE FAILS, THE ANOINTING TRIUMPHS 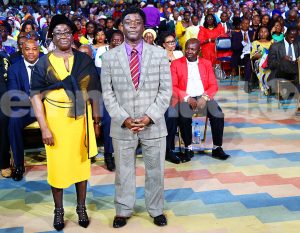 Life had lost its substance as her days were strewn in the pains she never bargained for. Doctors had carried out a surgery on her back, hoping that the herniated disc could be corrected. Alas, the exercise turned out to be a failure, prompting them to recommend a lumbar corset to enable her to move from place to place. Mrs Lileta Alozie would soon discover that the lumbar corset was almost of no positive consequence as the pains refused to abate. For three years, the Jamaican resident in the United States managed to live.

Her Nigerian husband, having exhausted all the options available to him, advised her to visit The SCOAN, knowing that the Arena of Liberty is famed for breaking of stubborn yokes as well as healing impossible ailments through Jesus Christ. He had been the one helping her to rise from the bed and would have wondered how he would continue to do this when there is a Prophet of God in his native country whom God uses to wipe away the tears of the sick, the needy and the afflicted.

Mrs Alozie received her healing instantly when Prophet T.B. Joshua prayed for her, in the mighty name of Jesus. The Power of the Holy Spirit radiated through her body like an electrical sensation, removing every anomaly and healing the diseased part of her body to the glory of God. During her testimony last Sunday, in company of her husband, she thanked God for finally despatching her pains and a problem that had forced her to live her life in instalments. “If you believe in God, He can do all things through His power”, she declared.

Mr and Mrs Aghemenlo had been unhappy for five years. The reason for their unhappiness stemmed from the sad fact that they were unable to bear a child of their own. Despite the fact that they had visited many prayer houses and hospitals, the hope of having a baby remained dim. They had been diagnosed with some medical conditions and had received treatment yet the old story remained the same. While Mr Aghemenlo was diagnosed with an infection, his wife was said to have not only an infection but also suffering from hormonal imbalance. 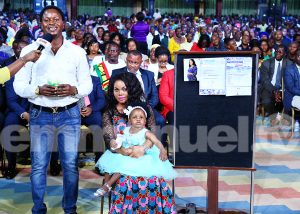 The emotional and psychological effects of their condition was immense. Mr Aghemenlo would always come under attack from his sisters who were beginning to get tired of his wife’s inability to bear a child for them. The social implications of their condition also affected them as friends and acquaintances would continually question the no-baby-saga that had taken a huge toll on their lives. Their woes continued until an in-law introduced Mr Aghemenlo to The SCOAN.

The Nigerian was convinced that God would intervene and change the story of their lives when he considered the life of his in-law – a businessman making good progress and radiating the grace of God in his life. More so, he had witnessed some breath-taking testimonies on Emmanuel TV and had concluded that their case was a small one. The couple visited The SCOAN and received prayers from Prophet T.B. Joshua. They were also blessed with the Morning Water.

After three weeks of praying and ministering the Morning Water as husband and wife, Mrs Aghemenlo released the first shocker to her husband’s hearing. “I have not seen my period for some time now”, she said. Though a man of faith, Mr Aghemenlo never expected that God would answer them so soon. Mrs Aghemenlo’s pregnancy was eventually confirmed after she underwent a test at a laboratory. For nine months, the pregnancy was nurtured by the Holy Spirit until she delivered a baby girl.

The couple testified last Sunday amid tears of joy from Mrs Aghemenlo who remembered the emotional trauma she went through as she battled the yoke of barrenness. Cuddling their beautiful daughter named Emmanuella, she had the following advice for people all over the world: “Have faith in God; pray and be patient. God will answer your prayers as He has answered mine.”

EMPLOYED THROUGH A PROPHET’S WISE COUNSEL 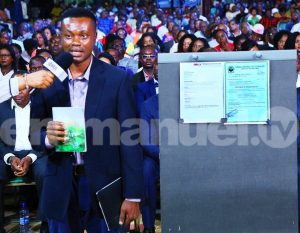 After graduating with a degree in Mechanical Engineering, Mr Wilcox Solomon had searched for a job for two years without any success. The young Nigerian was almost on the brink of despondency when he had a divine appointment with Prophet T.B. Joshua. He had attended a special forum organised by the man of God for Nigerian youths and was richly blessed with the wise counsel coming from the Prophet. The man of God had specifically told all the youths in attendance that education is never success in itself but a means to success. He also told them that their relationship with Jesus is the only thing that can guarantee success in their lives.

Heeding the wise counsel of the man of God, Mr Solomon developed a special relationship with God, making His Word the standard for his life. In a matter of days, his alignment with the teachings of Prophet T.B. Joshua yielded results as he was divinely connected to a job opportunity in a Transport/Engineering company through an acquaintance. While interacting with the Manager of the company, he had ministered the Morning Water, meditating and asking God to make a way for him. 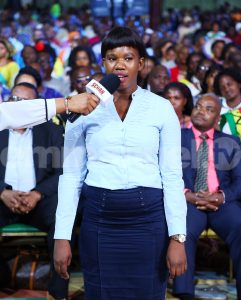 Mrs Frieda Keelu had suffered from the problem of ceased menstruation for nine months and had been severely troubled about the development. Psychologically, she was unsettled as doubts about her ability to bear children in future kept troubling her heart. The Namibian would always stay quiet and aloof whenever fellow women discussed issues concerning their menstrual cycle. Her strong desire to disentangle herself from the aberration brought her to The SCOAN.

Joining the Mass Prayer, she had keyed into a prophetic declaration by the man of God who said that congregants would dream dreams of what God would do in their lives. That same night she had a triumphant dream where she saw the prophet praying for her and woke up to discover that her hitherto ceased menstruation was flowing again, to the glory of God. Testifying last Sunday, she thanked God for coming onto the scene when she needed him the most. “Believe in the Word God speaks through the man of God; He will bring it to pass”, she advised.