THE BEAUTY OF LIFE - The Synagogue, Church Of All Nations - SCOAN - Prophet T.B. Joshua (General Overseer) Skip to content 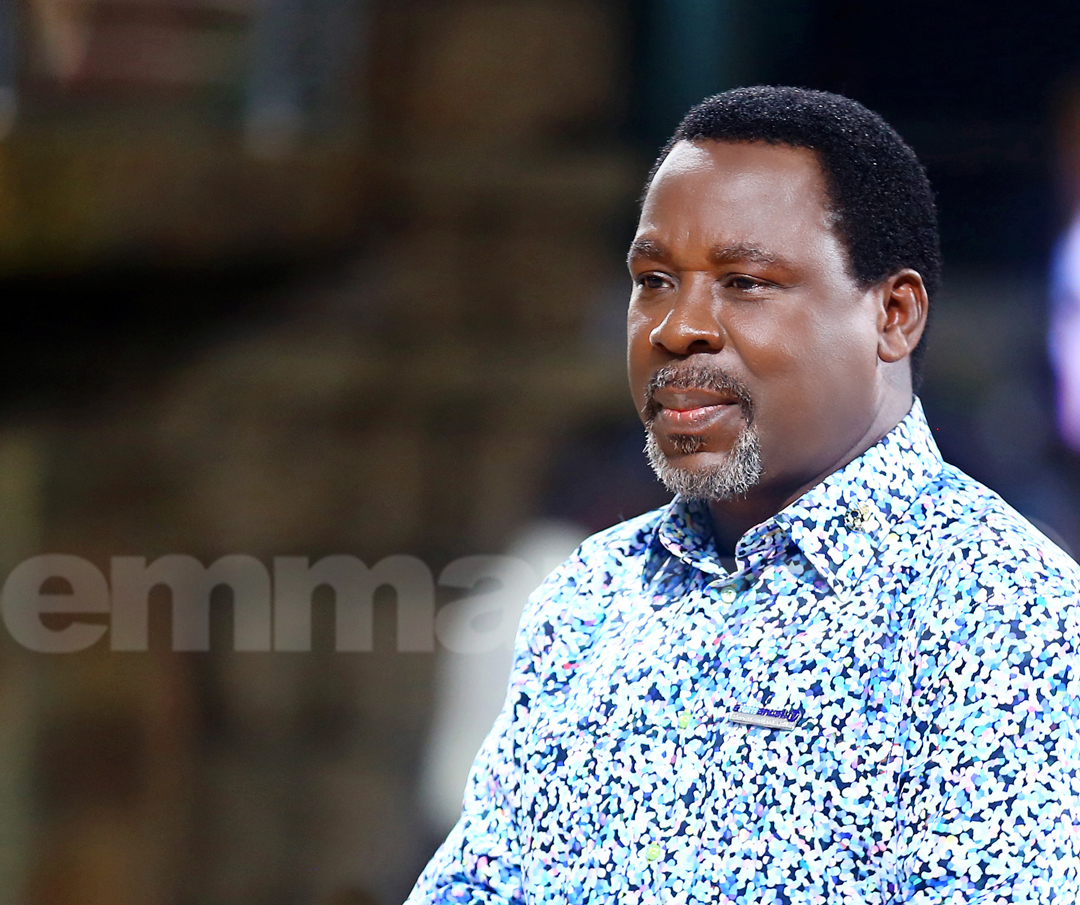 It was a wonderful time in the presence of God as The SCOAN Sunday service witnessed the manifestation of God’s unending grace in the lives of His children. The powers of prophecy, deliverance and testimony were fully felt as the anointing flowed through the length and breadth of the auditorium. 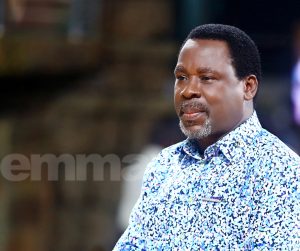 Prophet T.B. Joshua enjoined congregants and Christians all over the world to imbibe the spirit of helping the needy by giving to them even the little that God has blessed them with, adding that, “The manner and way in which we give attracts God’s attention, not what we give. “When we give to someone in a way that pleases God, someone is waiting to give to you too… Your labour of love without cheerful and sincere giving cannot help you. The beauty of life does not depend on how happy you are but on how happy others can be because of you,” he said.

Reminding the church of its role in an era when poverty and lack have taken over the world, the man of God reiterated the urgent need for true children of God to reach out to the needy in a manner that pleases God, lest their giving amounts to a waste of time. “All you have been giving, if you are not giving in a manner that pleases God, you are wasting your time,” he declared. He also enlightened the world on how giving can bring about contentment. “Don’t forget – your possessions alone cannot bring you contentment but giving help to the poor can.”

Concluding, he urged Christians to continue giving in love and from the heart, adding that, “There is no other way to prepare for this New Year; the best way is to let love lead. You must consider the way and manner you do things – that is love,” he advised.

During the Mass Prayer, the man of God spoke God’s Word into the lives of congregants and against every limitation, obstacle, bondage and affliction waged against the spiritual progress of God’s children. “I break every door that locks your heart. Be broken! Be released, in Jesus’ name,” he declared. As the prayers continued, there was palpable confusion in the kingdom of darkness as manifesting demons groaned under heavy bombardment by Heaven’s anointed artillery. As many were being delivered from all forms of satanic bondage, they vomited poisonous substances, thereby disconnecting themselves from whatever the devil had used to hook them onto himself. 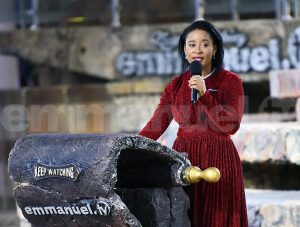 Earlier, Evangelist Annette had called on Christians to see themselves as true sons and daughters of God who are born to praise Him even when the reality on ground looks discouraging. “Rise up in faith in times of your affliction and give the Lord some praise,” she advised. She reminded them of the story of Paul and Silas (Good examples of the Biblical heroes of faith who went against common sense) who, through their songs of praise, secured a supernatural release from prison. “It is the merry who sing psalms of praise but Paul and Silas in this situation sang praises while in their affliction,” she observed, adding that, “Life is all about choices and how we respond to our situation”.

She summed up her message with a thought-provoking and instructive counsel: “When you go against common sense, you attract the attention and commitment of the Saviour…Don’t be surprised that when you begin to praise God Almighty in your difficulty, He will open the doors that had been closed because He is aware of your situation but He just wants you to give Him some praise!”

PREDATOR FAILS AS JESUS STEPS IN 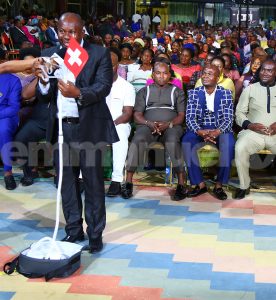 His days had known no peace ever since he was diagnosed with sleep apnea for which he had been using the sleeping machine to ward off bouts of insomnia that had threatened his difficult nights. In spite of the medical measures put in place to help him, Mr. Fred Chimeka still suffered from headaches, high blood pressure, sleeplessness and fatigue. Like a predator with ruthless intent, the ailment had ravaged him both physically and psychologically. The Nigerian resident in Switzerland knew that what he needed was the power above all powers. 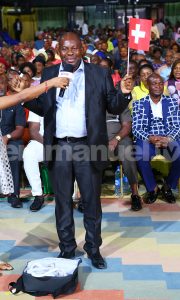 What baffled him was the very fact that he had been placed on three different sleeping machines and yet his condition remained the same. Matters were also made worse by the mere fact that he had been consuming a lot of medication which tended to be an exercise in futility. The more time wore on, the more he realized that he urgently needed that special intervention from above. “How on earth will I continue to live an artificial life with a sleeping machine attached to my nose everyday,” he had thought.

Mr. Chimeka wept to The SCOAN in search of Jesus because he knew that only the Son of God would end the woes that had trailed his health. He received his healing as the evangelists ministered the New Morning Water to him during a Sunday service. The power in the blood of Jesus took over his entire system and flushed out the sleep apnea through the medium of the New Morning Water, setting him perpetually free.  He testified last Sunday, radiating immense joy and renewed strength as he thanked God for turning his tears into laughter.

MY CONTRACT WITH CRUTCHES IS OVER

Mr. Duke Efetobor was diagnosed with osteoarthritis and lumbar spondylosis after he had fallen on a concrete surface several years ago. With all attempts by doctors to bring him back on his feet failing, they recommended a pair of crutches as well as a lumbar corset to enable him move from place to place. The pains and discomfort disturbed him to the extent that he sometimes harboured suicidal thoughts as the possibility of finding a solution to his problem seemed improbable. 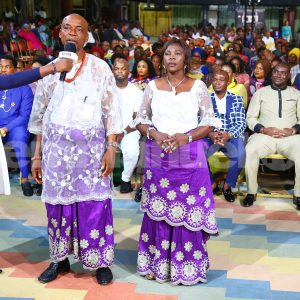 Tears of anguish and thoughts of hopelessness drove the Nigerian to The SCOAN. As Prophet T.B. Joshua moved around the auditorium praying for congregants under the guidance of the Holy Spirit, Mr. Efetobor cried out, calling for help and lamenting his inability to walk unaided. He beseeched God to intervene in his condition through His servant, Prophet T.B. Joshua. Filled with the power of the Holy Spirit, the man of God stretched his right hand towards him and commanded him to rise on his feet.

As soon as he rose, the crutches fell to the floor as the man of God pulled off the lumbar corset from his waist. Immediately, Mr. Efetobor started walking to the glory of God. He testified last Sunday, in the company of his wife who stood beside him all through those trying times. Beaming with smiles, he thanked God for healing him of an ailment that almost forced him to take his own life. He had the following advice for people all over the world, especially married men: “Stay true to God, stay with your wife and be faithful to her.”

JESUS WEATHERS THE STORM OF MISCARRIAGES

The Agu couple had been in the eye of the storm on account of their inability to have a child of their own. The problem had been that Mrs. Agu continued to succumb to miscarriages. The problem had almost erased all hope that the couple would one day carry their own child. After battling with the problem for some time, they decided to run to God for help. Their visit to The SCOAN was the beginning of their blessing.

The couple had an encounter with Prophet T.B. Joshua at the Prayer Line. After praying for them, the man of God also blessed them with the Morning Water. Husband 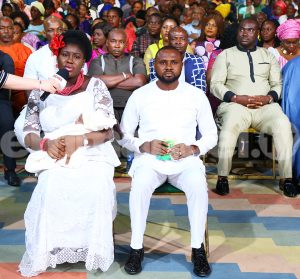 When time for delivery approached, doctors raised an alarm, saying that it may be difficult for Mrs. Agu to have a safe delivery without a Caesarean Section. That singular development took the couple aback. But rather than allow it to demoralize them, they decided to hand over the matter to God. Putting their faith to work, Mr. and Mrs. Agu rejected the idea of an operation, insisting that God will have His way.

Ministering the Morning Water amid fervent prayers, God’s way prevailed indeed! Mrs. Agu delivered her baby safely without coming under the surgeon’s knife. What the doctor deemed impossible was made possible by God. Testifying last Sunday, the couple thanked God for wiping away their reproach and for making them proud parents. They had this advice for people all over the world: “When you identify your problem, put it in prayer for solution is a moment away, in Jesus’ name”.

END OF A MACABRE DANCE

Those dance steps appeared funny and captivating but they were demonic means to a destructive end. Even Mr. Oluwadeji George did not know the full consequence of his possession by that malicious idol spirit. He had felt he was living life like any other sane person. Little did he know, until that fateful day of his deliverance, that he had been a tool in the hands of the devil. He was manipulated and used to destroy people’s destinies before Jesus arrested him at the arena of liberty. 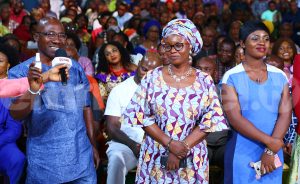 Possessed by an evil spirit from a very young age, Mr.  Oluwadeji George was at the mercy of the demon which used him like a toy to do all sorts of ungodly things. He would drink himself to mesmerizing heights and sniff tobacco snuff that usually made his eyes blood-shot. As soon as he was high, the evil spirit would lure him to the streets where he always ended up constituting nuisance in the community, venting his temper on people even without provocation. His senses were being remote-controlled from the pit of hell where his soul had been in captivity.

He would insult and create pandemonium for no just cause. His wife was at the receiving end of his misdemeanours as he would always unleash his terror on her. Everything in the home irritated him beyond explanation. The Nigerian had cheated on his wife and had seen her as an enemy instead of a wife. The evil spirit made sure that the peace in their marriage was truncated as it afflicted him with the spirit of anger.

His encounter with God at The SCOAN would however change the story of his life forever. He received his deliverance during the ministration of the New Morning Water by the evangelists. Immediately the anointed medium was ministered to him, the evil spirit started speaking through him, before it was cast out and sent back to the pit of hell, in the mighty name of Jesus. “I have been using him right from his childhood. I made him to fight and to be hostile. I have been in his body since he was 4 years old”.

The idol spirit also revealed how it made him dance in different ways whenever it was time for worship.  Any man or woman who witnessed him dance would be initiated into their kingdom and would also have his or her destiny destroyed. It also revealed how it had caused tension in his home through the spirit of anger. During his testimony in company of his wife, Mr. George regretted his past actions which were caused by the evil spirit.

“It was a demon that was behind those actions and it is Jesus Christ that has set me free forever. I love my wife and thank God for her perseverance which has brought me to Christ,” he told Emmanuel TV. The Holy Spirit has since taken full control of his life as he now sees his wife in the light of God’s Word. She is indeed a faithful partner and helper and deserves all the love in the world. He has vowed to continue to make God’s Word the standard for his life.