THE REALITY OF FAITH - The Synagogue, Church Of All Nations - SCOAN - Prophet T.B. Joshua (General Overseer) Skip to content 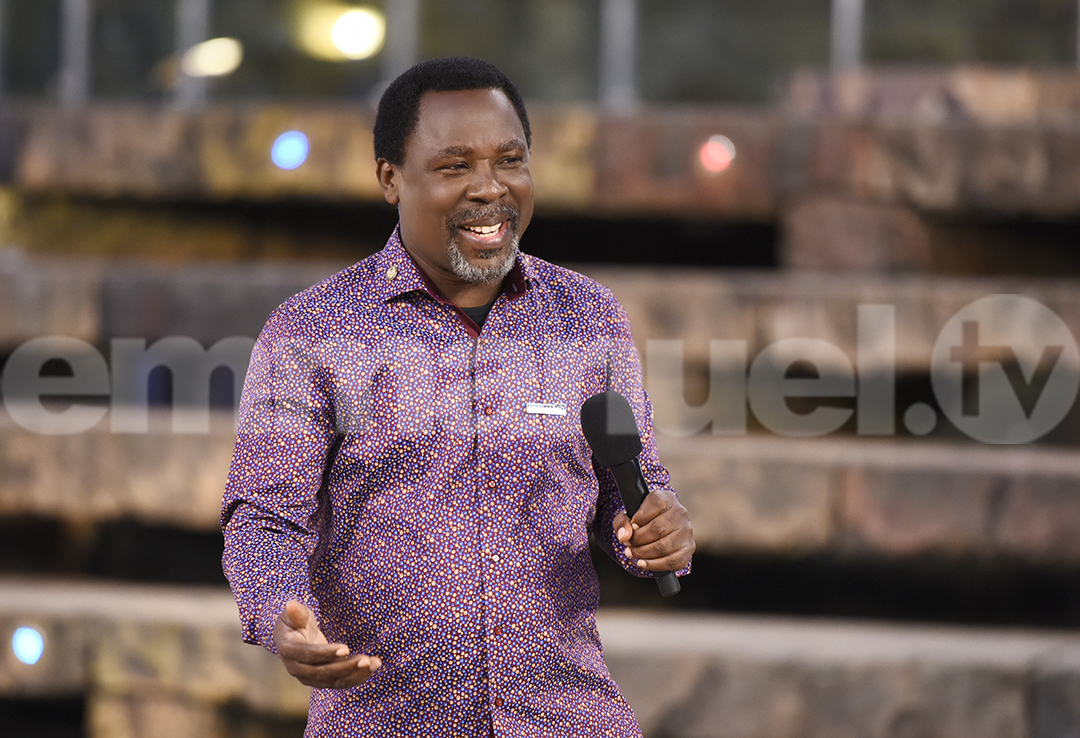 Flying in all the way from the Dominican Republic, Prophet T.B. Joshua prayed for the congregants and viewers. Before the commencement of the prayer, he had reminded congregants that the Word of God is the basis of everything in life. “If you do not have the Word of God, you have nothing at all – we have the Word of God”, he said. The man of God also admonished Christians to imbibe the spirit of forgiveness so that their Heavenly Father would forgive them their sins. “We grieve the Holy Spirit when we hold a grudge against our brother”, he added. The man of God thereafter commanded healing, deliverance and breakthrough upon the lives of congregants and viewers alike, in the mighty name of Jesus.

During the Mass Prayer session, the evangelists took authority in the name of Jesus to spoil the day for satan and all his evil machinations. All those he had bound with chains, through different afflictions, were set free. Those who had been spiritually contaminated through eating in the dream, received their deliverance as they vomited all sorts of demonic and poisonous substances. As yokes were being broken, the weak became strong and the poor became rich as was seen in the glorious exclamations of “Thank You Jesus” that ended the spiritual showdown. 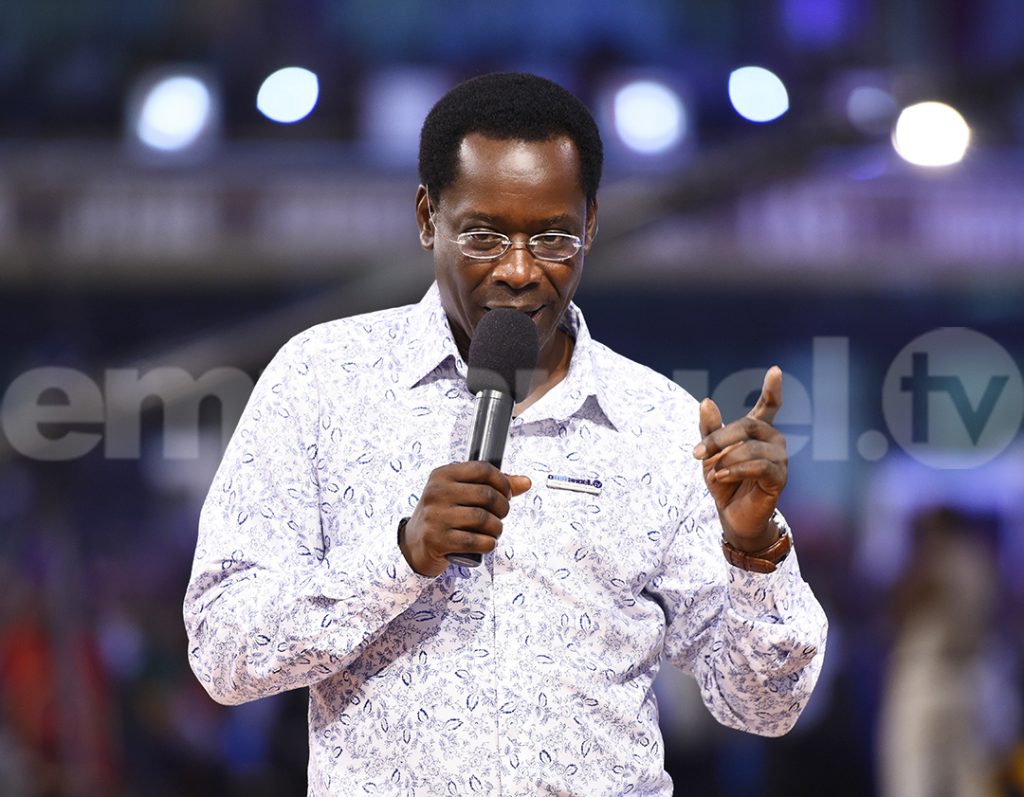 In his message titled THE REALITY OF FAITH, evangelist Racine encouraged Christians to put on the whole armour of faith in order to be partakers of God’s unlimited blessings and glory. “The righteousness that comes from God’s Word is based on faith”, he said, adding that faith is a lifestyle of trusting in God and it brings to our mind’s eye the reality of those things we cannot discern with our physical eyes.

Continuing, he declared that the confession of faith makes us to do extraordinary things, especially when our confession proceeds from genuine faith in our hearts. He also reminded Christians not to panic when their faith is being tested. The reason, according to him is not harmful. “When my faith is being tested, my endurance has a chance to grow. My situation is not meant to impair me but to improve me”, he declared.

THE PAINS OF A REVEREND GENTLEMAN WIPED OFF 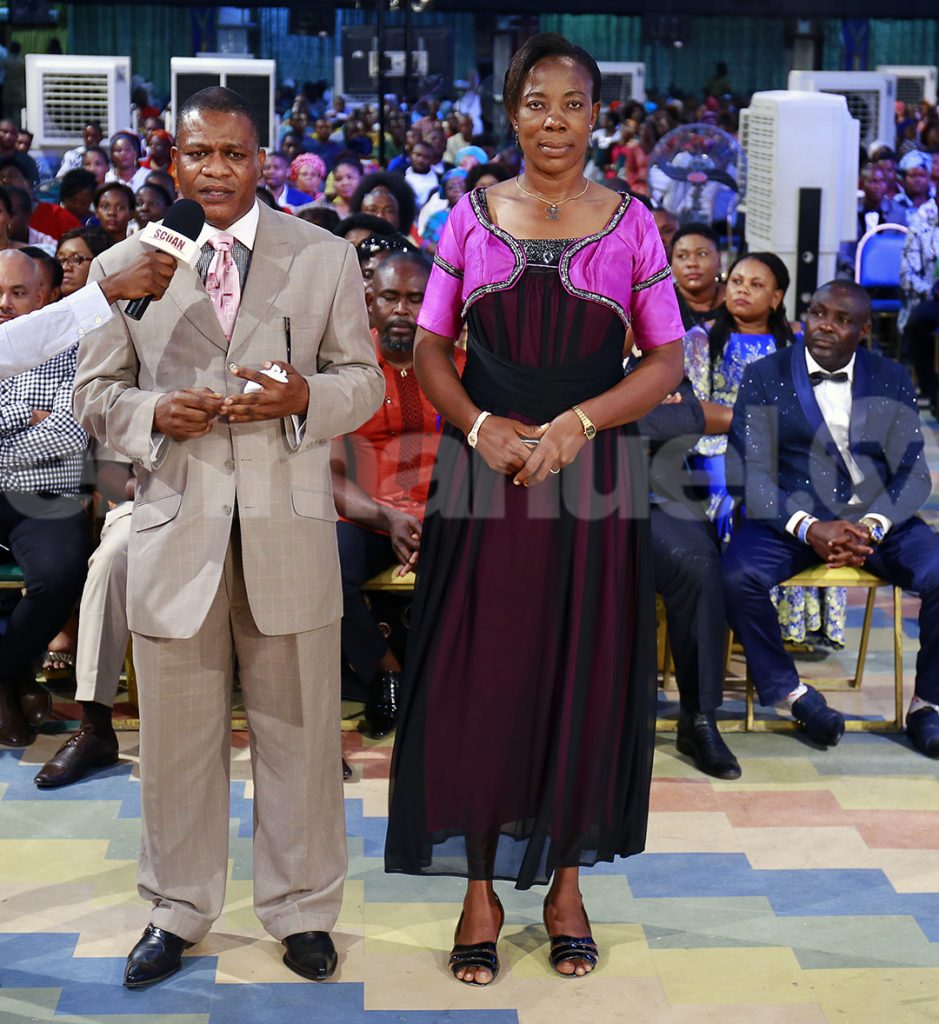 He was besieged by not just one problem. As a reverend gentleman, the psychological burden that came with his inability to tackle those problems were very embarrassing. The severe waist pain, high blood pressure, heart and kidney disorders had defied even the sophisticated medical system in the United States of America where he resides. Every attempt to find a solution ended in near-hopelessness.

Mr Walter Ofoegbunan was in the eye of the storm as his ministry suffered from the inadequacies in his health. He could not even sit down as a result of the waist pain and was dispirited to the lowest ebb. His prayer life was greatly affected by the condition. Having tried all available options without any reprieve in sight, the Nigerian decided to come to The SCOAN. In his heart, he had convinced himself that with faith, God would put an end to his burdens. 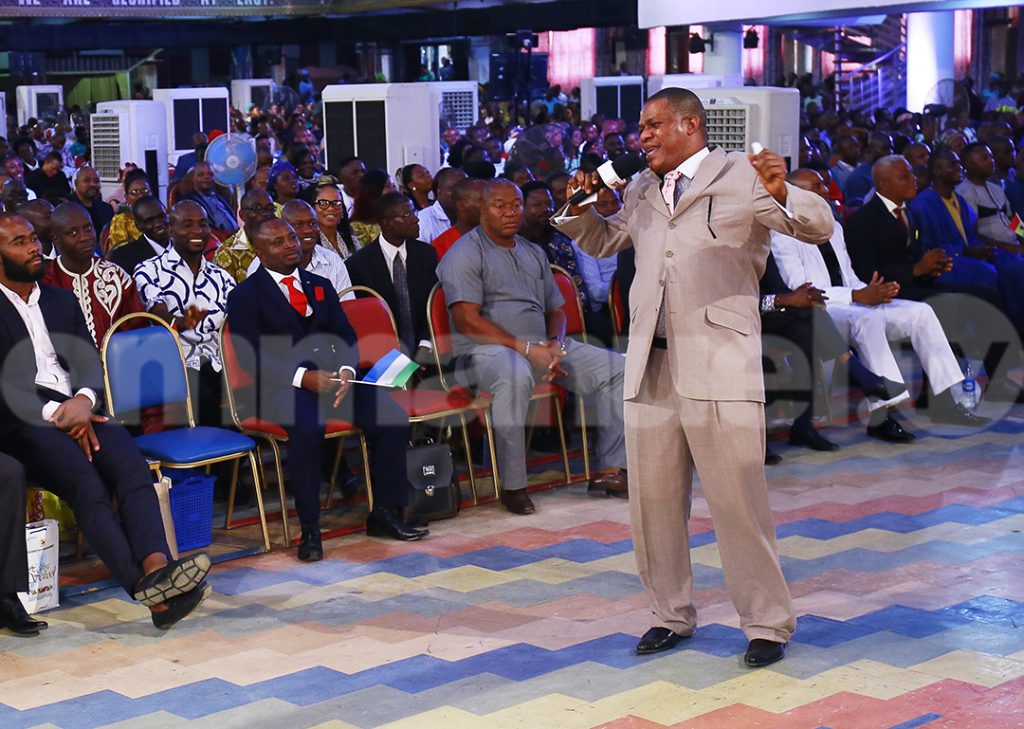 He came to the Arena of Liberty with a lumbar corset and received ministration of the New Morning Water. Immediately the anointed medium was ministered to him, the Holy Spirit swung into action, deleting all the sore points in his body and restoring him to sound health, in the mighty name of Jesus. Within seconds, ailments which had held sway for more than five years, succumbed to the power of the Holy Spirit.

Testifying during the Live Sunday Service, Mr Ofoegbunam declared that he is now very fit and full of life, adding that he has overcome, through the power of God, all the debilitating conditions that held him down for many years. “The moment the New Morning Water touched me, I was instantly restored”, he said, amid glorious cheers from congregants. He had this advice for people all over the world: “Put your trust in the Lord, no matter your situation, God is faithful.”

A GLORIOUS RISE IN DESTINY 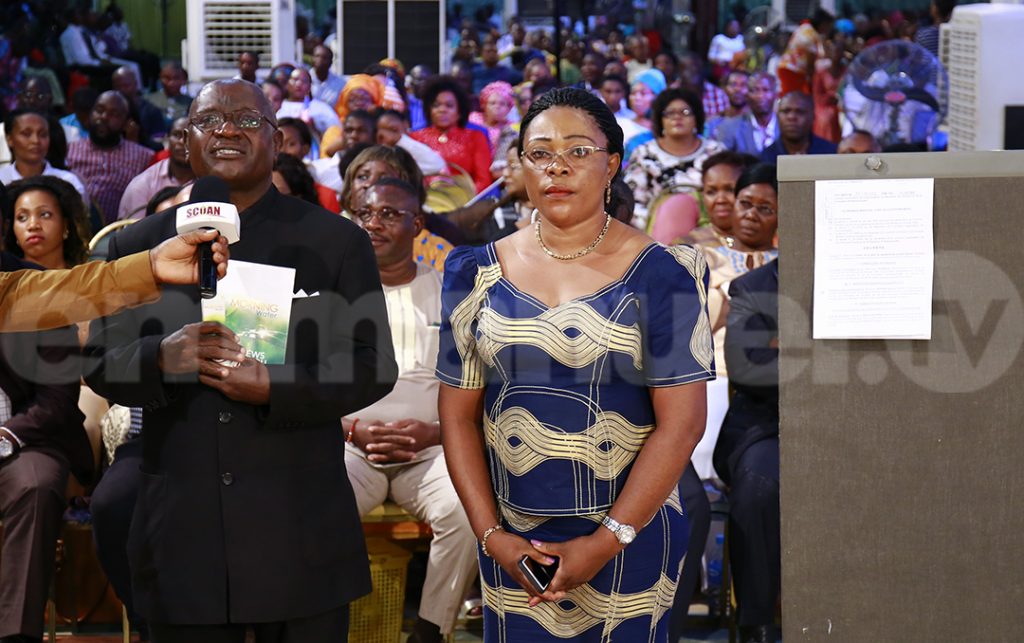 As a civil servant in the Cameroonian Parliament, he served meritoriously for 11 years and had illustrious expectations to be promoted to a higher rank. Those expectations would however be smashed by the harsh realities of life. Rather than being promoted, Honourable Bokwe Samuel Ngoe’s career hit the crossroads as his contract came to an inglorious end. It was a moment of indescribable sadness and anguish that would take a serious toll on his family life. With dwindling finances, he became unable to cater for the many needs of his family. 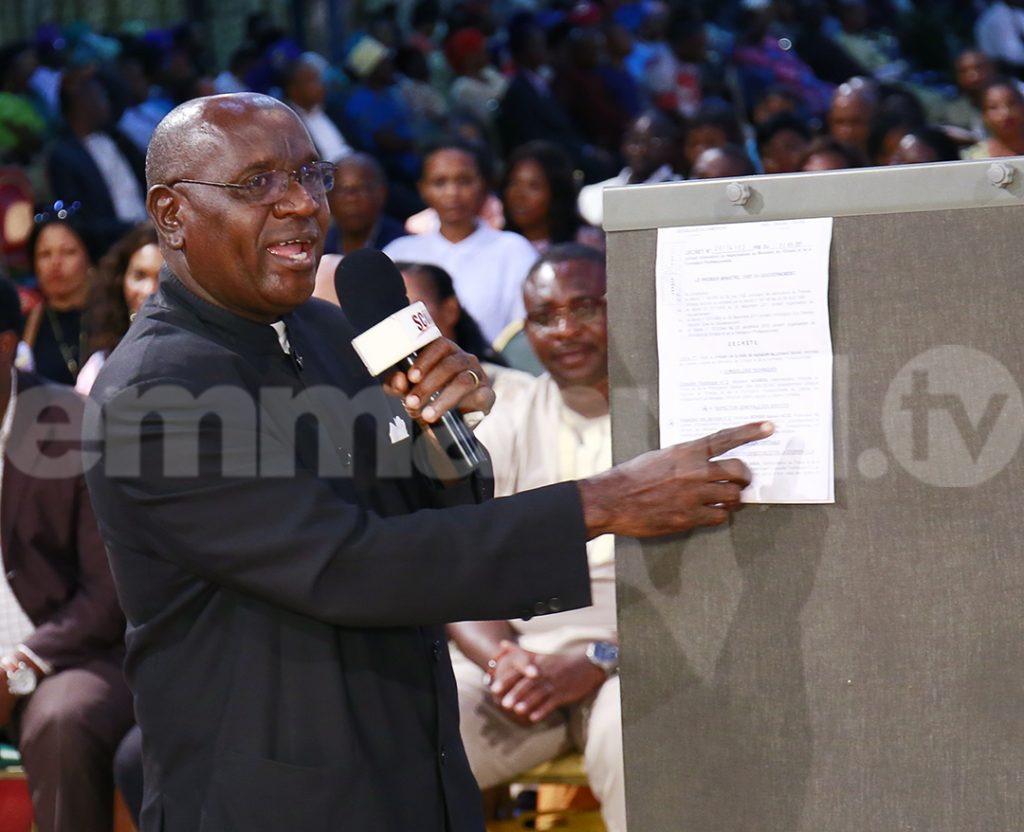 Dejected and reeking in the emotional injuries his sad fate had brought upon his life, he soon discovered that old friends had deserted him. With nowhere to run to for help, he resorted to doing menial jobs just to make ends meet. In the midst of all his tribulations, his wife stood by him and continued to support him as a Christian wife is wont to do. For three and a half years, she stood like a real pillar of support, ensuring that ‘enough was enough’ from satan.

April 2016 witnessed a dramatic twist to the story of his life as he visited The SCOAN after grappling helplessly with his setbacks. Being a strong viewer of Emmanuel TV, he had built his faith to the extent that nothing was going to stop him from tapping from the blessings that abound in the Arena of Liberty, through Christ Jesus. The Cameroonian received the Morning Water and ministered it to himself.

That singular decision to visit The SCOAN and receive the Morning Water changed his life as he was appointed the Inspector General of Services in the Cameroonian Ministry of Employment and Vocational Training. In an emotion-laden testimony, last Sunday, Honourable Ngoe thanked God for wiping away the years of lack in his life and replacing them with joy and laughter. He advised people all over the world to continue to repose their trust in our Lord, Jesus Christ.

LIBYAN DEPORTESS: FROM A DUNGEON TO A PLACE OF HOPE 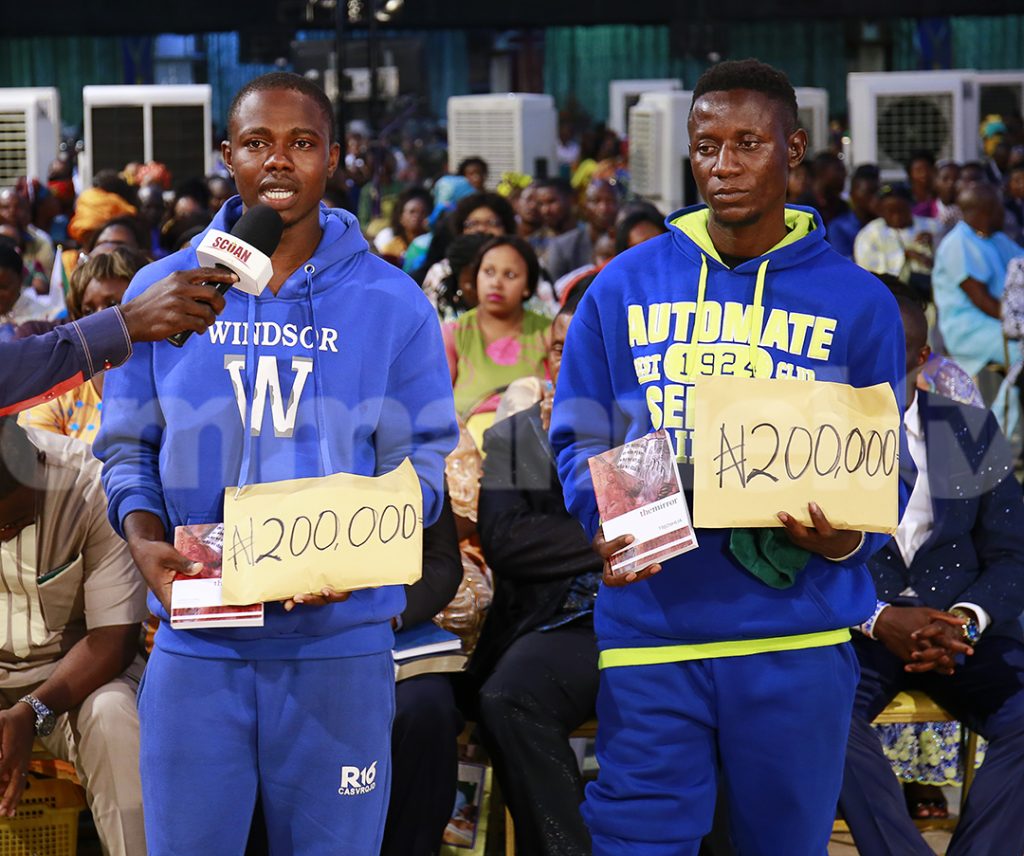 Victory and Osazee came to The SCOAN with gory tales of how they were subjected to the most unthinkable forms of human cruelty in Libya, a country that had been enmeshed in political turmoil. Their experiences, as narrated by themselves, painted pictures of anguish and hopelessness; they teach one important lesson about life: not all that glitters is gold!

Victory did not live up to the import of his name as he had abandoned his barbing business, on the sugar-coated advice of a friend to seek greener pastures abroad. Mesmerized by the mouth-watering prospects of crossing to Europe through the illegal Libyan gateway, the Nigerian raised the sum of one hundred and fifty thousand naira which was paid to a middleman to facilitate the journey. Alas, he would soon realise that he had been misled. The journey to a land flowing with milk and honey soon became an odyssey to despair and death.

Ending in the custody of kidnappers, to whom he was sold, Victory was forced, under duress, to buy his freedom with the sum of two hundred and fifty thousand naira. Before he regained his freedom, he would be given a daily toast of the Libyan dehumanization that had since assumed global fame. Life in the dungeon (where he was dumped with two hundred other illegal migrants), with all the beatings and abuse, had its far-reaching emotional consequences. 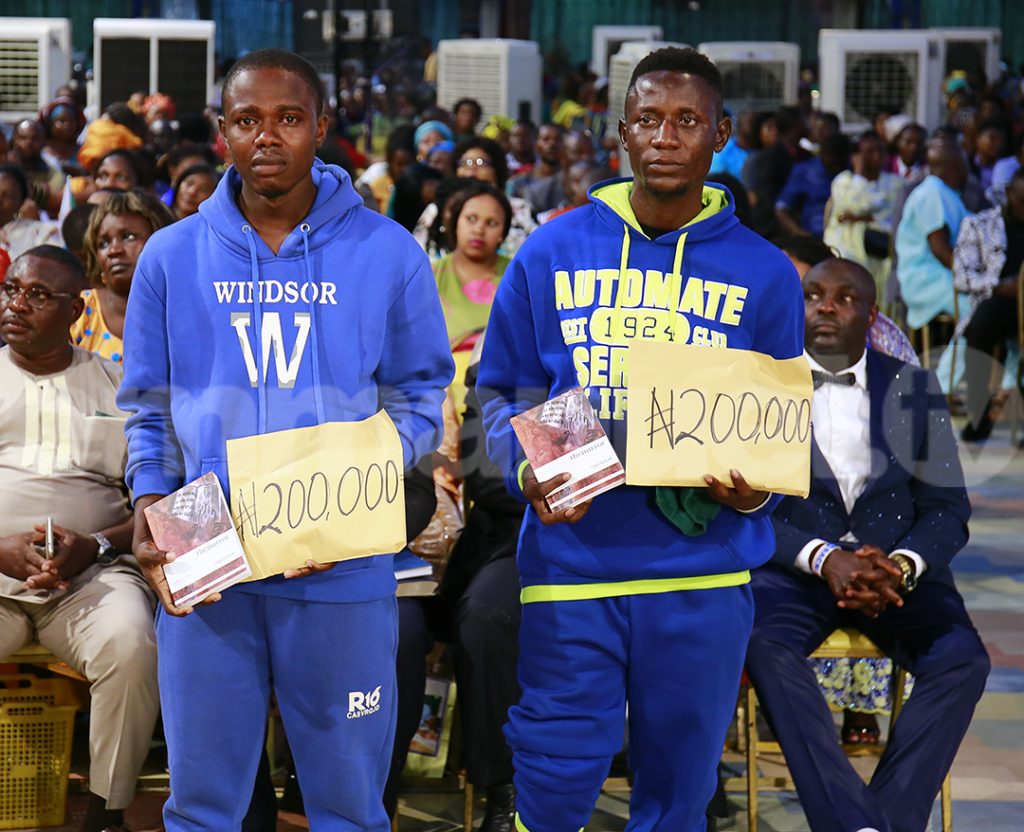 Victory witnessed the death of many fellow travellers whose lives were cut short by brute force. Life in its entirety was a wasteland with no whimper of hope! Somehow, he was able to find himself in a detention camp where he granted a heart-rending interview to the Cable News Network, CNN.

On his own part, Osazee’s travails on his road to Europe through Libya, culminated in his arrest, imprisonment and subsequent deportation after he had managed to weather the turbulent storms that trailed his every move through the illegal routes. Back in Nigeria and faced with the stark reality of a gloomy life, with no one willing to lend a listening ear, he turned towards the direction of The SCOAN, having heard of the charitable demeanours of Prophet T.B. Joshua and the Emmanuel TV Partners and what they had been doing for fellow deportees.

Victory and Osazee came to The SCOAN alongside hundreds of other deportees and were blessed with a huge sum of money running into millions of naira. They also received food and words of exhortation from The SCOAN evangelists.  Returning last Sunday to thank God for saving their lives and for using Prophet T.B. Joshua and the Emmanuel TV Partners to put smiles on their faces, the two young men were further blessed with the sum of two hundred thousand naira each to enable them to start life afresh. Indeed, only LOVE could wipe away the pains of their past.