The SCOAN Sunday service brought the kingdom of darkness to its knees as all present allowed the songs of praise to raise their hearts above any situation they faced on the outside; declaring God’s supremacy on the inside.

In her message titled LIVING FAITH, evangelist Catherine urged Christians to submit themselves to the will of God by imbibing the principle of faith which is the only thing that connects them to the Father. “Faith is the route to Jesus – our movement towards God”, she said, adding that “Faith is where God wants you to be.”

She declared that Peter was able to make a huge catch when he humbled himself and believed in the power of Jesus to turn around his situation from bad to good. “When Peter’s eyes were opened to faith, he became a blessed man. Peter, when he saw Jesus at the seaside, saw the power and anointing of God… Peter went from a hopeless man to a faith-filled man. Peter changed when he allowed God’s Word to prevail over sense evidence. Peter saw himself clearly. He realised that there was something far greater than his ability to catch fish”, she said. 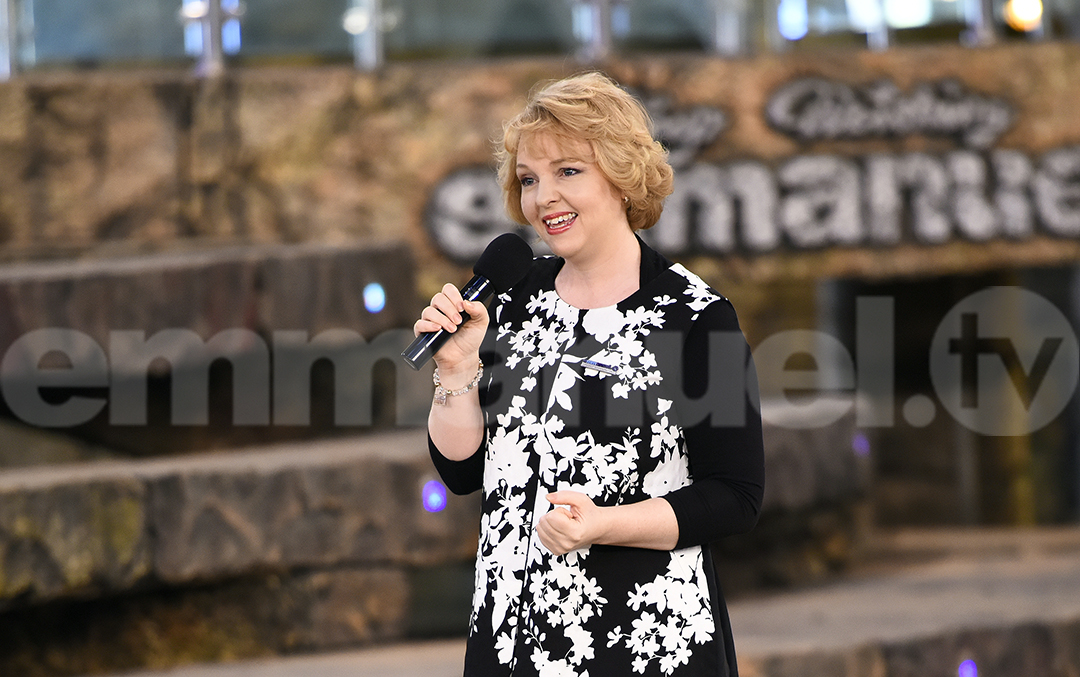 She warned that, in keeping faith with God, a good Christian is supposed to worship the Producer of the products and not the products themselves, as Peter realised when he came in contact with Jesus. “It dawned on Peter how much he had misplaced Christ in his heart, worshipping the product instead of the Producer”, she pointed out.

Concluding, she reminded them of these Spirit-filled words of our father in the Lord, Prophet T.B. Joshua – “If I can get you into faith and get you to stay there, you will be victorious.”

Evangelists sent by Prophet T.B. Joshua enjoined congregants to brace up for the ensuing battle against satan and his demons, who had been running riots in the lives of many who have allowed themselves to be connected to them through the chains of sin. During the Mass Prayer, the Spirit of God was felt in the auditorium as many vomited poisonous substances and manifested all sorts of evil spirits that had held them captive for many years. Captives were set free even as age-long yokes and afflictions were broken, in the mighty name of Jesus Christ.

The confusion in the kingdom of darkness intensified during the ministration of the New Morning Water. The fire was too hot for satan and his agents to bear as his demons were disgraced and exposed. Multitudes received their deliverance and were ushered into a new dawn of salvation and redemption through Christ Jesus. To God be the glory, Jesus restored everything the devil had stolen from the lives of God’s children.

Congregants were also taken to faraway Dominican Republic through Emmanuel TV as Day One and Day Two of Prophet T.B. Joshua’s crusade in that country were rebroadcast. Aside from the wonderful healings and deliverances, clips also showed Prophet T.B. Joshua being honoured with the highest national honours of the Dominican Republic for his unquantifiable contributions towards advancing the cause of humanity, especially the less privileged around the world.  Congregants also prayed along with the man of God as he prayed for viewers all the way from the Dominican Republic, in the mighty name of Jesus.

For a Chief Nursing Officer to be ridiculed by ailments she ordinarily ought to have dealt some medicinal blows is perhaps one of the greatest ironies of life. But the story of Mrs Elizabeth Oyewale simply demonstrates the fact that only God is immune to the oddities and challenges of life. For 35 years, it had been a race from pillar to post in search of a solution that remained elusive until her visit to The SCOAN.

The Nigerian was diagnosed with lumbar/cervical spondylosis as well as osteoarthritis and had been trying to use her influence as a medical practitioner to treat the ailments. However, all her efforts failed to address the problems, forcing her to spend months at the University College Hospital in Ibadan and at the University of Calabar Teaching Hospital. The best the doctors could offer was to place her on painkillers. 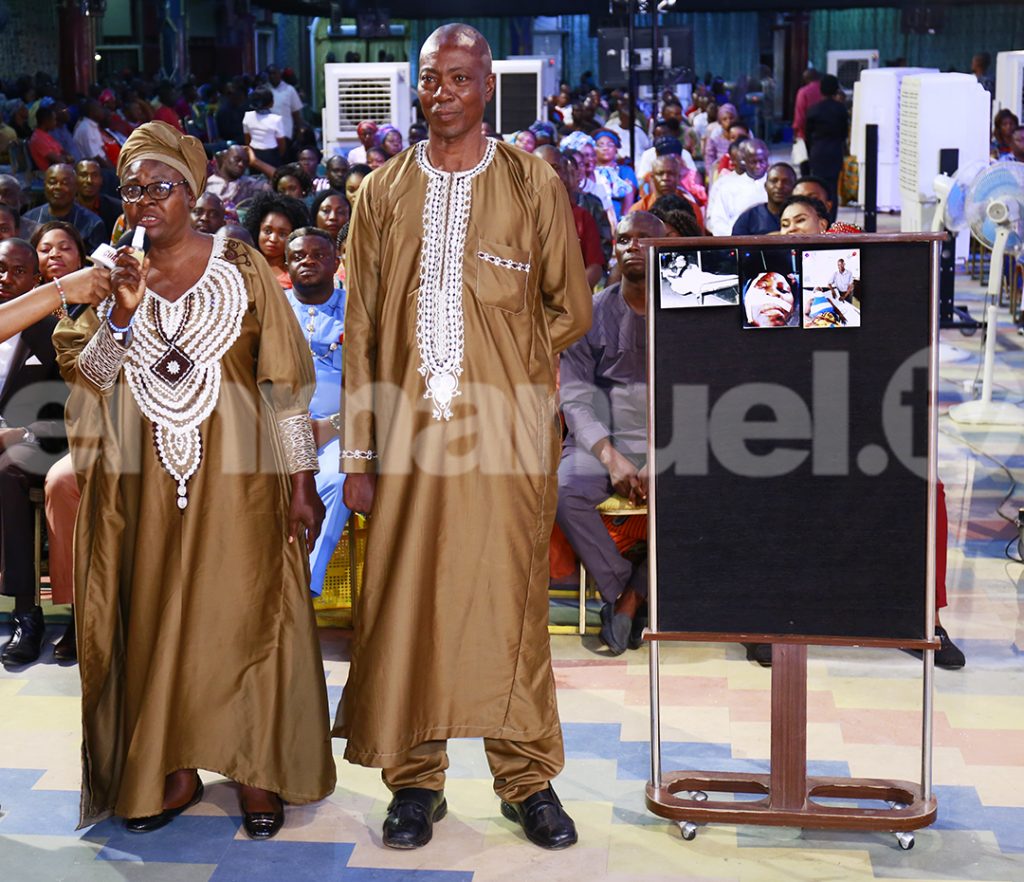 Speaking to Emmanuel TV, she recalled that the problems started after she was involved in a fatal motor accident, in which six lives were lost. It was later discovered in a hospital where she was rushed to that she had sustained some injuries which affected her spine. The injuries would later manifest themselves and threaten her career and wellbeing, forcing her to spend seven months lying helpless in a hospital.

Unable to walk and in severe pains, her husband became the ‘woman’ of the house. He did the cooking, the washing and the cleaning. He was also responsible for her daily routines as he bathed and dressed her. It was a huge burden on him as a husband and father but he was unrelenting because he appreciated the fact that marriage was for better and for worse. 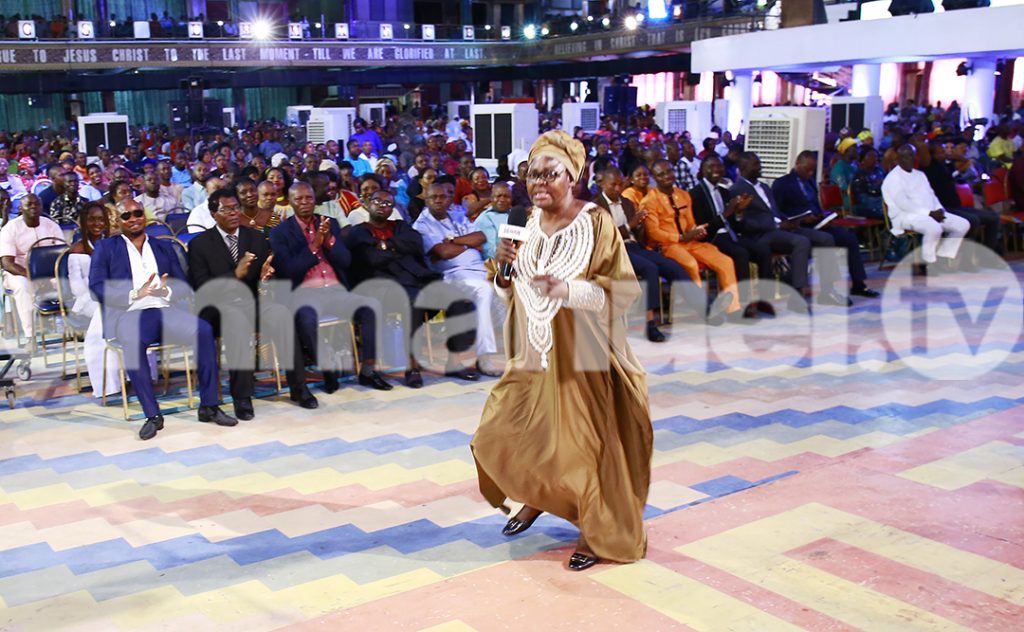 Bed-ridden for months, Mrs Oyewale’s job was on the line even as she became financially down due to the enormous resources she had been channelling to treatment. Adorning a neck collar and a lumbar corset, she was confronted with the idea of surgery but she turned it down, preferring instead to come to The SCOAN, having watched the wonderful faith-building healings and testimonies on Emmanuel TV.

She received her healing right inside the car in which she was brought after the evangelists ministered to her the New Morning Water. For a debility of thirty-five years, it took the Holy Spirit just a matter of seconds to uproot the problems completely and restore her to her feet again by the power and glory of God. Mrs Oyewole walked in a triumphant declaration of the wonders of God, waving her hands and shouting, “Thank You, Jesus”, to the applause of congregants.

She testified last Sunday, accompanied by her husband and exuding great joy for the wonderful thing God had done in her life. She told congregants how her husband encouraged her to keep watching Emmanuel TV when it appeared as though all hope was lost. She thanked God for healing her completely, adding that she even had three different X-rays done which confirmed that she was healed indeed through God’s intervention. “Have faith in God; a day shall come that you shall meet the Lord”, she advised.

FRUIT OF THE WOMB – A GIFT FROM GOD

Recurrent miscarriages had stood in between them and a child of their dreams. Mr and Mrs Agu knew that something was wrong somewhere. For several years, Mrs Agu had been getting pregnant but once the pregnancy approached its seventh month, she would lose it. The development had become a routine with her, forcing her to become depressed as a result of worry. Most times, she remained aloof from people and kept her woes to herself. Her days were soaked in tears of anguish. 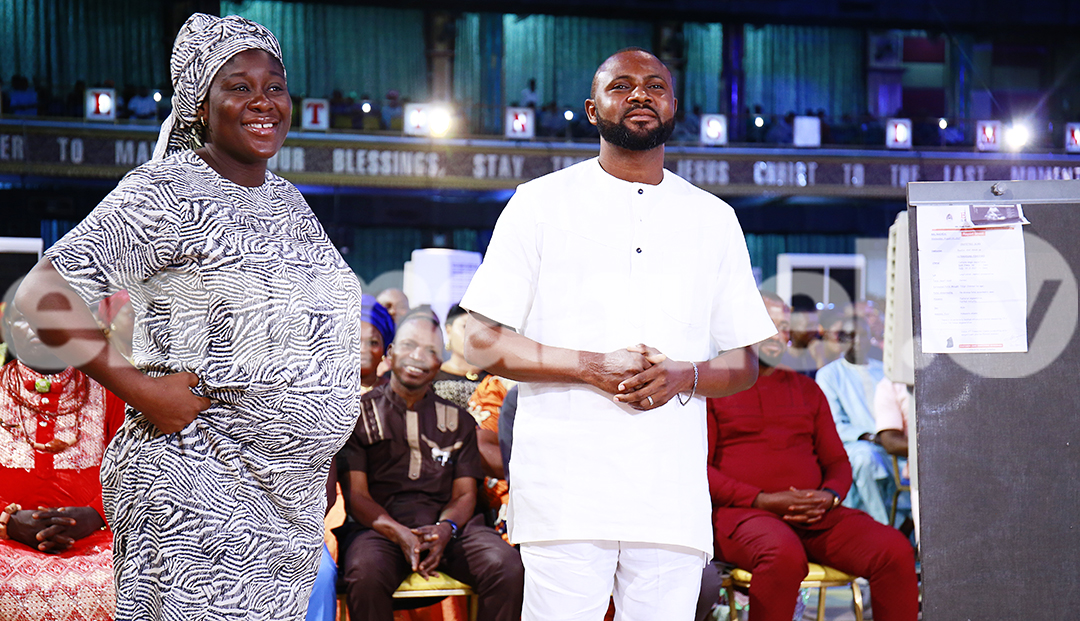 The last straw that broke the camel’s back happened when, on her birthday in January, 2017, she had another miscarriage. That singular occurrence was more than the miscarriage of a pregnancy. It was also the miscarriage of her ultimate dream – a sad reality that finally nailed her hope to its coffin. She wept bitterly and switched off her phones, making it impossible for well-wishers to reach her on such an auspicious occasion of her birthday. She was later diagnosed with a fibroid and pelvic inflammatory disease.

A friend would later introduce her to Emmanuel TV. The uninhibited demonstration of signs and wonders on the anointed channel inspired in her heart, a rhapsody of great expectations as she made up her mind to visit the Arena of Liberty. During their visit, Mrs Agu and her husband received the anointed touch of Prophet T.B. Joshua. They also received the Morning Water which they ministered during prayers. That same week, Mrs Agu missed her period. She was not eager to go for a test because past experiences had dragged her mind into gloom.

Three months later, she visited the same laboratory which she had been using all the while. The result of the test brought joy to her heart. Both the fibroid and pelvic inflammatory disease were nowhere to be found. The only visible growth was her unborn baby. So far, she has been ministering the Morning Water even before taking her antenatal drugs. Mrs Agu and her husband testified last Sunday for the gift of the fruit of the womb. Now in the ninth month of her pregnancy, husband and wife are expecting a safe delivery, in the mighty name of Jesus.

Knowing that God is not a God of abandoned projects, the couple believe that the Heavenly Father would surely finish what He had started in their lives. They had the following advice for people all over the world: “Just believe in God; trust in Him. He will always be there to see you through.”