YOUR SEAT IS STILL THERE - The Synagogue, Church Of All Nations - SCOAN - Prophet T.B. Joshua (General Overseer) Skip to content 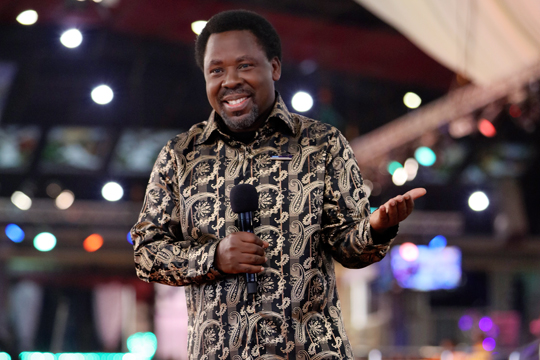 Being the first Sunday of the year 2016, the church service witnessed a massive turn-out of congregants who came with their hearts full of glorious expectations for the New Year. Ushering them into the fresh vista of a new beginning, the choir dramatised the reality on ground by assuring every worshipper that the fears of the out-gone year have been buried in the past. “I am no longer a slave to fear… I am a child of God”.

It was Prophet T.B. Joshua’s first appearance in The SCOAN after several months of physical absence. But as he would later tell the congregants, “You can see that your pastor did not go on holiday”. That short statement came on the heels of the massive demonstration of God’s power by the Holy Spirit through Prophet T.B. Joshua who prophesied and delivered many from the stranglehold of demonic forces. In less than thirty minutes, he had wreaked untold havoc on the kingdom of darkness! Evangelist Ruth had earlier assured Christians of the constancy of their place in God in a message titled ‘YOUR SEAT IS STILL THERE’. Referring to a couple of biblical stories, with special focus on the story of ‘The Prodigal Son’, she observed that, irrespective of the flaws of a child of God, he or she still retains a place in the Father’s house. But that is made possible only through repentance and reconciliation. In other words, every true believer will always be accepted back and restored to his or her place of glory in God if only there is true remorse and repentance.

“When a Christian wrongs God, fellowship is broken but he does not lose his place as a son or daughter of God. No matter what you feel about yourself, no matter what you feel about God, your seat is still there and Jesus is always there to reconcile you”. January 3, 2016 ushered in the first Sunday Service of the year with joy as it assured worshippers of their place in God’s plan, irrespective of their human frailties.

While silver bells sounded all over the world on December 24, 2015, in anticipation of Christmas, the devil also had his own evil plans for Mr Kirsten Nematandani. The South African who once headed his country’s football association, was on his way to a local community when a cow crossed the road and caused him to apply brakes suddenly. Hitting the cow hard, the animal was lifted by the impact and landed at the back of the vehicle. It was the cynosure of all eyes to behold the huge animal flung to the back of the vehicle by the impact of the collision.

For Mr Nematandani, it could only have been a miracle. Even people who came to the scene of the accident wondered how he was able to escape unhurt seeing the magnitude of damage done to the vehicle and the harm done to the cow. Testifying before the congregation, he told them that it was the goodness of God through the Morning Water and Morning Sticker that saved him from the cauldron of wicked forces. Apart from an insignificant bruise on his finger, Mr Nematandani came out of the experience unscathed. He urged people all over the world never to undermine the counsels and directives of God.

SMALL LEGS STEP INTO BIG SHOES AT THE SCOAN

Miss Monica Maria’s mother had visited The SCOAN in August, 2013 and returned to their residence in Ethiopia with bottles of the Morning Water. The young Indian lady was undergoing some tough times at her work place. She was not happy and depressed. In search of a way out of the stress, she comforted her spirit with Emmanuel TV and continued to build her faith. One day, she visited the United Nations website and saw a vacancy announcement. She applied immediately as that same day was the deadline for the submission of applications. From the very moment she applied, she continued to minister the Morning Water daily on her credentials, confessing that the job was hers.

Despite UN regulations on employment that stipulates a three-month review time for all applications, Miss Maria was contacted through phone after just one month and was informed of her employment as a Technical Officer in Geneva, Switzerland – a senior position. Testifying with the highest sense of frankness and humility, she observed that she knew she was undeserving of the position, especially at the age of 23, but that God only wanted to bless her. For all the financial blessings and peace of mind, she thanked God immensely, stating that her mother’s last visit was made possible through a loan which has since been paid.

THE YOKES OF POVERTY AND DEPRESSION BROKEN THROUGH PROPHECY

The Nwankwos had come to The SCOAN in 2012 in search of divine rescue from the pangs of poverty and hardship that had crept into their lives. Seated in the auditorium, their situation was spotted, through prophetic insight, by the man of God, Prophet T.B. Joshua.

He told them about the depression and suicidal tendencies that had threatened the family’s joy due to frustration. After receiving prayers and deliverance accompanied with the Morning Water, the man of God declared them free from all their problems. As they were about to return to their hotel, an evangelist offered them the sum of three thousand naira for their transportation. For Mrs Nwankwo, the gesture appeared funny as their hotel was only a stone-throw from the church. The couple agreed to commit that money into business, believing that it was blessed. Before they returned to Russia, their country of residence, Mr Nwankwo bought six packets of yam flour which he intended to sell in the European country.

On getting to Russia, the six packets of yam flour sold out in just a minute. From three thousand naira which was the equivalent of twenty dollars, they realised two hundred dollars. Little by little, they continued to import the yam flour and realised bigger margins with time. Today, they own four Afroshops in Russia with different sections, including a hair-making salon – the first of its kind in the entire nation. They also have two exotic cars and now live in peace of mind and abundance. The couple advised people to appreciate the mighty works of God through the medium of the Morning Water.

FIBROIDS AND STAGNATION KICK THE BUCKET

Ms Mashamaize was troubled by a legion of problems. Her professional nursing career coupled with her academic endeavours put so much pressure on her. The South African national also had uterine fibroids and experienced stagnation and disappointments in many areas of her life. After undergoing surgery for fibroids in 2010, the unhealthy growths resurfaced in 2011 much to the bewilderment of her gynaecologist who encouraged her to seek God’s help, stressing that the resurgence of the fibroids was a mystery to her with all the years she has practised.

Her quest for God was given a boost by a friend who told her about the kingdom exploits of Prophet T.B. Joshua. Searching for the man of God endlessly via the internet and cable TV, she almost gave up because she had erroneously thought that T.B. Joshua was the name of a TV channel. But her persistence paid off and she finally discovered Emmanuel TV and came to realise that Prophet T.B. Joshua was a Prophet of God and not a TV channel. She developed the habit of praying with the man of God and eventually visited The SCOAN in December, 2013. After receiving prayers from the man of God, she returned to South Africa and was certified free from fibroids after an ultra-sound scan was conducted on her.

As she continued praying along with the man of God on Emmanuel TV, her hitherto poor academic performance improved drastically. According to her, the man of God signed some papers she was holding in the dream and told her they were her university papers. After that experience, she applied for admission into the university and was successful. Today, she has obtained her Bachelor’s and is currently rounding-off her Master’s programme in Clinical Psychology. In addition to these blessings, she was also rescued from a ghastly motor accident through God’s protection after ministering the Morning Water. Ms Mashamaize advised people not to listen to the voice of negativity but to have faith in God and focus on His Word.

CATAPULTED TO NATIONAL LIMELIGHT BY GRACE

As a teacher who had put in 15 years into the profession, Mr Justin Atindohouto expected promotion to higher levels but it was never to be. Surprisingly, it was his subordinates that overtook him in the scheme of things, much to his disappointment. To find an escape route from the psychological trauma his stagnation was causing, he took to drinking alcohol. His family life deteriorated; he could no longer concentrate on his parental role. His mother was hugely taken aback by his situation because he was the most educated in the entire family.

One day while watching a weekly national council meeting of his country on TV, he was shocked to hear his name mentioned being appointed as a Representative of the Minister of Culture by the President of the Republic of Benin. According to him, that was the mother of all miracles. He thanked God because he did not apply and yet he was selected to work with the Minister of Culture. Displaying his employment letter duly signed by the President of his country Mr Atindohouto advised people all over the world not to be discouraged as their miracle would surely come. He added that his years of riding a bike were over as his new position included a chauffeur driven car!

After being promoted to the Rank of Superintendent of Immigrations in 2008, Mrs Ebong from Akwa Ibom State, Nigeria, battled to get to the next rank. On three occasions, her name was not included in the list of officers to sit for the promotion exams, leaving her stranded in the same position for six years while all her colleagues enjoyed their new ranks. Remembering the counsels of the man of God who encourages Christians never to yield to the devil’s antics whenever there are challenges, she continued to believe in God for a breakthrough.

When it was time for another promotion exam, she prepared herself, ministered the Morning Water on her papers and sat for the exam, calling on God to hear her cry. To God be the glory! After the results were released, she was promoted to the rank of Chief Superintendent of Immigration at last. Thanking God for the miracle, she urged people to put their trust in Him and rely on His promises.

GOD’S LOVE FOR HIS CHILDREN IS CONSTANT AND UNFAILING. BRETHREN, OUR PLACE IN GOD’S PLAN WILL REMAIN AS LONG AS WE CONTINUE TO HUMBLE OURSELVES AND ASK FOR FORGIVENESS WHENEVER WE GO ASTRAY. YOUR SEAT IS STILL THERE! EMMANUEL!